The Victims of Economic Triage: a response to Bob Herbert

Today's NY Times column by Bob Herbert entitled "The Data and the Reality" is getting a lot of play. It starts out:

I keep hearing from the data zealots that holiday sales were impressive and the outlook for the economy in 2011 is not bad.

Maybe they’ve stumbled onto something in their windowless rooms. Maybe the economy really is gathering steam.

My room isn't windowless, and the economy really is gaining steam. Just for example, see this post by Calculated Risk noting that personal consumption expenditures are growing, and growing at an increasing rate. As a result, many analysts are increasing their estimates of growth in this quarter and for 2011.

But in the rough and tumble of the real world, where families have to feed themselves and pay their bills, there are an awful lot of Americans being left behind.

Herbert goes on to catalogue the plight of the long-term unemployed, which he calls " a portrait filled with gloom" and says "It is hard to overstate the dire shape of the unemployed.” They have gone through their savings, their 401k's, they may be foreclosed upon, they may have had to borrow. And they have lost hope of ever making their nest egg - such as it may have been - back:

There is a fundamental disconnect between economic indicators pointing in a positive direction and the experience of millions of American families fighting desperately to fend off destitution. Some three out of every four Americans have been personally touched by the recession — either they’ve lost a job or a relative or close friend has. And the outlook, despite the spin being put on the latest data, is not promising.

Not promising for whom? The data isn't lying. If you are employed, there is an excellent chance you are going to stay employed. People who are fearful of being laid off don't spend like the data from the last few months say they are spending. As I also pointed out last week, the cuts in the Recession were so deep that we are adding much more by way of hours (blue) than we are in jobs (red) : 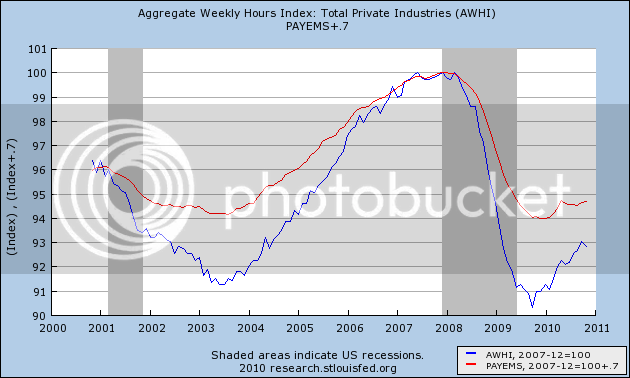 If you are employed, you probably are feeling more optimistic about your current situation and the immediate future. In short, for people with jobs, the data looks promising because it is promising. Ironically, Herbert stumbles on to the truth in his last three sentences:

The zealots reading the economic tea leaves see brighter days ahead. They can afford to be sanguine. They’re working.

And that, dear reader, is the rub. The Recovery has not been strong enough so far, and may not become strong enough in 2011, to place many of the unemployed into jobs. And not enough people inside Washington, DC, including one entire political party, and apparently the President as well, seem to care enough to alleviate their plight. How else explain the recent Tax Deal which extended Bush tax cuts for billionaires, but failed to extend unemployment benefits for the "99ers?"

There has been, wittingly or not, a deliberate triage in the approach of Washington to the Great Recession. Those who kept their jobs have been tided over the worst of the economy. Those who lost their jobs are being told to please disappear so that we cannot see their privation. And there is no prospect whatosever that this callous and deliberate neglect is going to abate in the next two years.

The data and the reality are not at loggerheads. While we have a Recovery that is stronger than the last two, and nearly as strong as that following 1982, it isn't enough. The employed - which includes the vast majority of Americans, after all - really are seeing the benefit of that Recovery, and that is what the data is showing. Furthermore, the consumer spending data that Herbert highlights (the same highlighted by Bonddad earlier today) constitutes the best hope that some of those destitute unemployed will be offered jobs in the near future -- remember: spending leads employment, not the other way around.

The problem is, what we need is a Recovery that at least deserves to be compared to that of the New Deal. We don't have it, and we're almost certainly not going to - certainly as long as one political party idolizes Calvin Coolidge, and the other party includes a President whose opinion of FDR appears to have been shaped by Amity Schlaes.
Posted by New Deal democrat at 1:30:00 PM