Economic Year In Review: The Year We Didn't Fall Into the Abyss

Reading economic blogs over the last year, it would be easy to get the impression the U.S. economy was mired in the worst depression of the last 200 years. For writers on the political right, any argument that makes the current administration's policies look terrible is to be used, regardless of its factual basis. Arguments from the left are based in a sense of betrayal; the new administration was not "progressive" enough; hence all progress that has been made is temporary or fleeting. And economic blogs -- most of whom correctly predicted the recession -- are still mired in a perma-bear mentality. Hence, all sides of the debate have a vested personal or ideological interest in seeing no progress at all, which explains why the mere fact the recession has been over for over a year now has been barely mentioned anywhere. But looking back on 2010, one trend stands out: despite the near continued prognostication of impending doom and imminent collapse around every corner, the U.S. economy actually continued to expand. Let's look at some of the details. 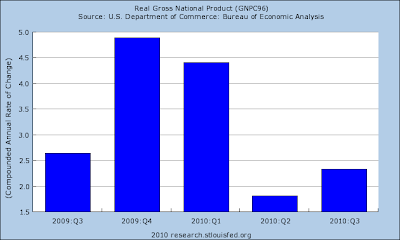 Above is a chart of real GDP growth at a compounded annual rate of change. Here we see that top line growth has occurred for the last five quarters. The pace has slowed the last two quarters, but recent reports of retail sales and manufacturing activity indicated the the third quarter number will probably be revised higher. 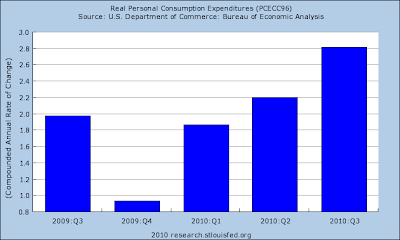 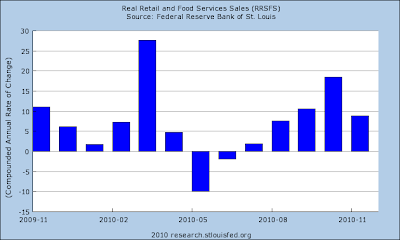 Retail sales -- a subset of PCEs, have been on fire for the last four months, increasing at a strong annual rates. 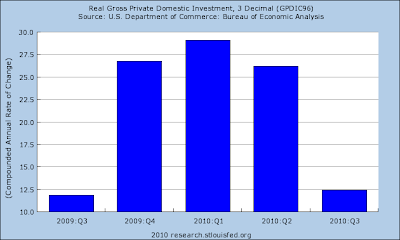 Real investment has also been increasing, rising strongly from the 4Q09 to 2Q10, and then increasing at a compounded annual rate of 12.5% last quarter. 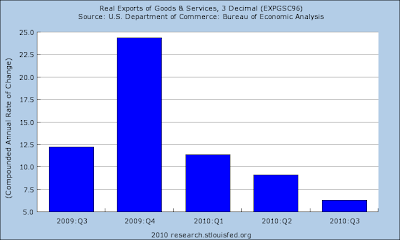 And while the U.S. is still a net importer (which subtracts from overall growth) total exports are still increasing at a compounded annual rate, and have been over the last five quarters. While the pace of the increase is declining, it is still over 5% on an annual basis.

Lets take a look at manufacturing. 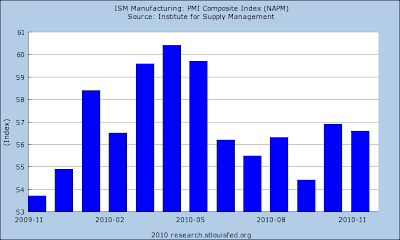 The ISM manufacturing index has registered over 50 for the entire year, indicating the manufacturing sector is expanding. This is one reason for the increase in exports seen above. 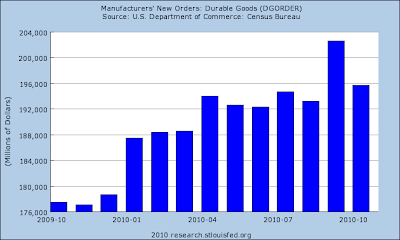 Total new durable goods orders are in a clear upward trend. While the pace has slowed, this is a common trait with this data series -- that is, month to month it can be volatile. 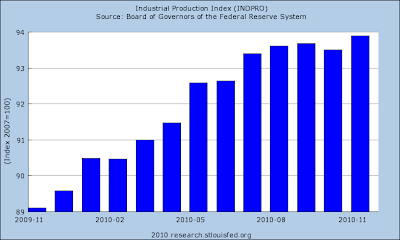 Industrial production is also in a clear upward trend, although the pace of increase has slowed. 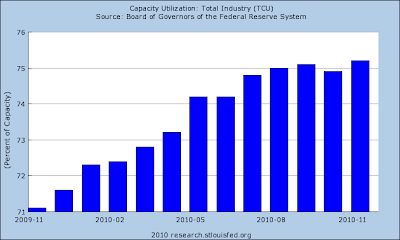 And capacity utilization is also moving higher, although the pace of increase has been slower over the last few months.

While the pace of manufacturing increases has slowed over the last few months, the leading indicators imply we'll see a renewed increase over the first half of next year:

Says Ataman Ozyildirim, economist at The Conference Board: “November’s sharp increase in the LEI, the fifth consecutive gain, is an early sign that the expansion is gaining momentum and spreading. Nearly all components rose in November. Continuing strength in financial indicators is now joined by gains in manufacturing and consumer expectations, but housing remains weak.”

Says Ken Goldstein, economist at The Conference Board: “The U.S. economy is showing some sparks of life in late 2010. Overall, the indicators point to a mild pickup after a slow winter. Looking further out, possible clouds on the medium term horizon include weaknesses in housing and employment.” 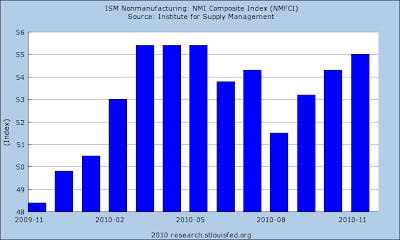 While there are far fewer indicators for this section, we see the ISM service sector index has been above 50 for the last 10 months. In addition, the pace of expansion has been increasing.

There are two areas that are still the economic "problem children:" real estate and employment. Real estate will probably be a problem throughout 2011, although there is an outside chance we'll see a bottom sometime over the next 12 months. Lumbers futures recent strong advances may signal housing starts are about to increase. And while the employment situation is terrible, the unemployment rate and initial jobless claims are behaving in a manner similar to the last two recoveries.

In short, the calls for impending doom that we've seen and heard for the last twelve months have been wrong.