Stock prices had four periods of movement yesterday. They opened with some fairly wide vacillations (a), but then settled down in a very tight trading range for most of the day (b). There was a sharp sell-off before before the close (c) which was followed by a quick rebound (d).

The Treasury market was very dull. Prices have a slight uptrend between lines a and b, but closed up .1%.

the big news yesterday was the dollar's "rise" (b) after a long fall (a). I've drawn the Fibonacci retracement levels in the event the dollar begins a counter-trend rally.

Commodity prices were generally very subdued yesterday as well. they opened with a quick spike (a) but were also in a tight range for most of the trading session (b). 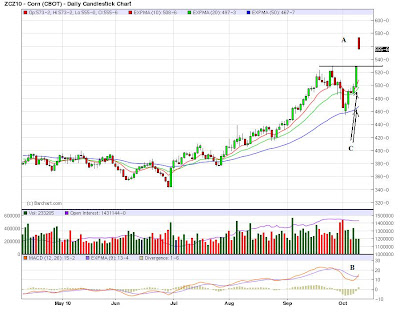 Corn gapped higher (A), largely because of the USDA's downgrade of this years corn crop. Prices are now above key resistance and the MACD has printed a buy signal (B). Also note the EMAs are still very bullish (C) -- all moving higher and the shorter above the longer. 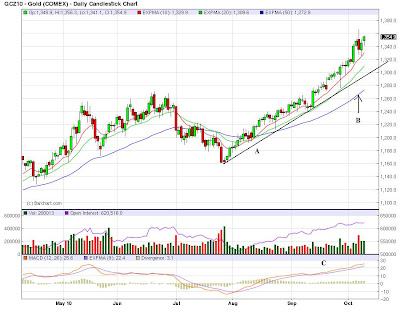 Gold is still very much in an uptrend (A). The EMAs are bullish (B) and the MACD (C) indicates more is probably on the say.
Posted by Unknown at 5:00:00 AM