Houston, Texas: A Study in the Importance Of Infrastructure

This map is linked directly from Google, so I'm not able to draw on it. However, first notice the city is literally a giant bulls eye. Downtown is pretty much right at the center. Toward the southwest along highway 59 is Sugarland, toward the west along I-10 is Kary, in the Northwest along Highway 290 is Jersey Village and at the very top right along I-45 is the Woodlands.

All of these cities are suburbs of Houston. And all have grown strongly over the last 20 years. And all are located along a major highway.

Now consider the cost of building the major highways in comparison to the benefits of four separate communities growing at strong rates, all feeding into a major city. Think of the financial benefits over a period of decades -- as in, once the highway is built the benefits start to accrue as the communities build and the benefits increase at higher rates as the communities become larger. For example, 30 years ago, Sugarland was literally barely there. Now -- 30 years later -- it's a thriving community with a population of 81,725 in 2009 that has had a 21.9% increase in its population since 2000. In other words, the highway is still paying a dividend in terms of economic growth. And the same can be said of all four communities mentioned above along with all the other outlier communities in Houston along major highways.

Now consider that the 10-year is currently trading at a yield of 2.62%. What do you think the internal rate of return will be on well-planned projects. Really high. And the benefits now are extraordinary. Consider that construction employment has dropped precipitously during the latest downturn: 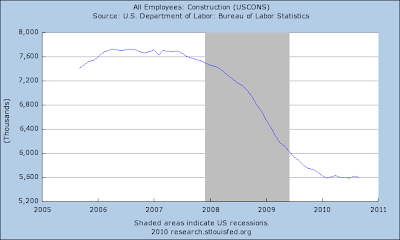 The above chart shows a drop of 2,000,000 jobs. Putting those people to work would have the immediate effect of putting people to work. And no, they wouldn't be digging holes only to fill them up later. They would be constructing and improving the nations sagging infrastructure. And 30 years later along highways we'd see townships, growing and people prospering. And we could do it a 2.62% interest cost. What a great deal.

Here is perhaps the saddest part of this situation: when you analyze the investment from a pure business standpoint, it makes tremendous sense; that is, when you look at the current cost of funds over the long-term benefits (think decades) this is literally a no brainer.
Posted by Unknown at 11:30:00 AM