Mish vs. ECRI vs. Krugman one year later: One helping of crow for Prof. Krugman?

As Barry Ritholtz pointed out at the time, exactly one year ago today a very specific intellectual challenge was made. It started with Mish strongly challenging ECRI's record of predicting recessions.

Michael Shedlock has an awesome takedown of ECRI’s claim that its indicators (a) have successfully predicted turning points in the past (b) point to a sold recovery now. I’d add that this is a really, really bad time to be relying on conventional indicators.

Why? Basically, because in a zero-interest rate world — the three-month rate was .066% last I looked — especially one that’s suffered from a collapse of the shadow banking system, conventional indicators don’t mean what they usually mean. Increases in the monetary base aren’t especially expansionary. The yield curve more or less has to slope up, even if no recovery is expected. And so on.

So historical correlations, to the extent that they exist — and as Shedlock points out, ECRI is claiming a much better record than it really has — can’t be counted on to prevail. There’s really no alternative to making fundamental analyses of the macro situation.

Lakshman Achuthan of ECRI responded with a very specific challenge:

we fully expect the current economic recovery to prove to be stronger than the last two, at least through mid-2010....

While we don’t necessarily expect our clarifications to change your views about the near-term course of the business cycle, we would hope that if, a year from now, ECRI’s leading indexes are proven to have been correct, you would publicly acknowledge the same. After all, the proof is in the pudding.

It is exactly one year later today. So, was "the current economic recovery stronger than the last two, at least through mid-2010?" The data is in, and we have an answer.

To judge the issue, I am relying on the indicators chosen by the NBER to gauge the end of recessions: GDP, Industrial Production, Real retail sales, Nonfarm payrolls, Aggregate hours worked, and Real income. As of June 30 of this year, here is how they stacked up against the last two recoveries: 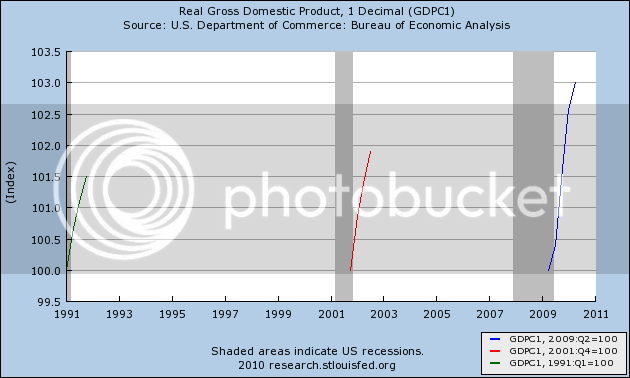 This is no contest. Judging based on 12 months from the end of the 3 recessions as decided by the NBER, the year between June 30, 2009 and June 30, 2010 showed the strongest GDP growth.

There is also no contest when it comes to the first 12 months after the recession bottom as to Industrial Production: 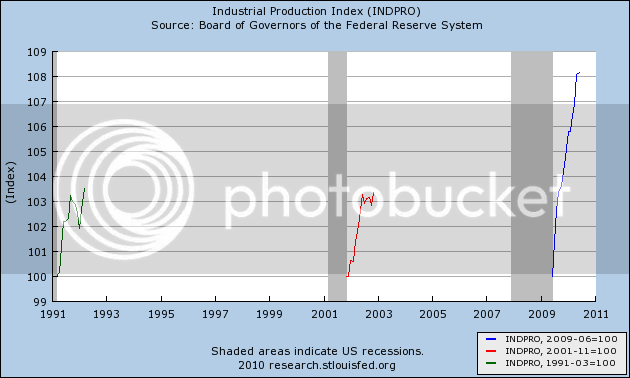 The same is true of real retail sales: 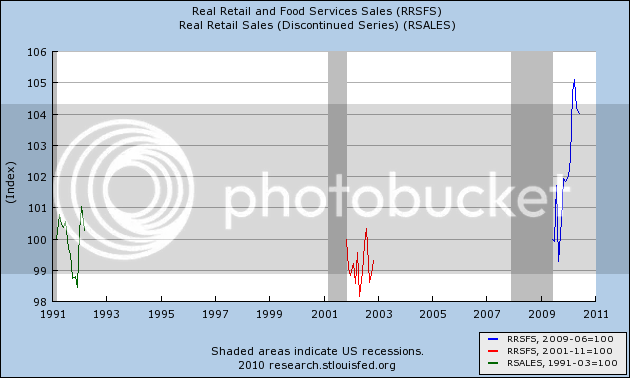 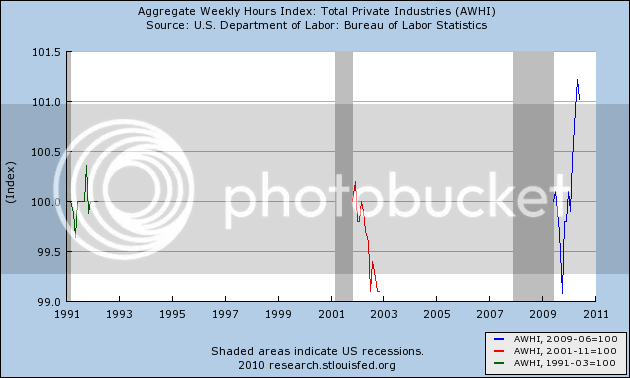 But the biggest surprise of all is the one measured by nonfarm payrolls. In the graph below, the blue line measures payrolls growth for a period of 6 months from the lowest post-recession reading of the "jobless" recoveries (most recently, December 2009 through June 2010). The red line, by contrast, measures job growth (or not) in the twelve months since the official NBER bottom: 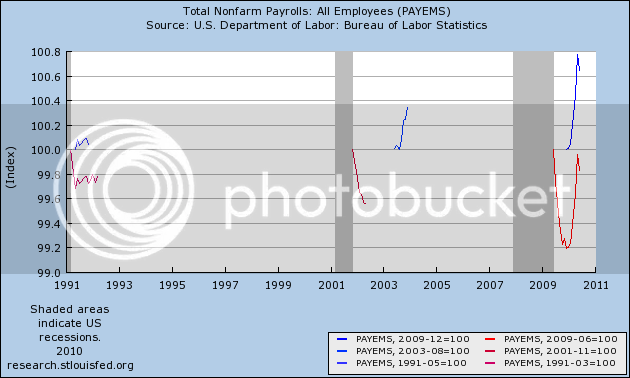 I expected the two different modes of measurement to yield very different results. Instead, either way, the present recovery through June 30, 2010 has been stronger for jobs than either of the last two.
Finally, here is real income: 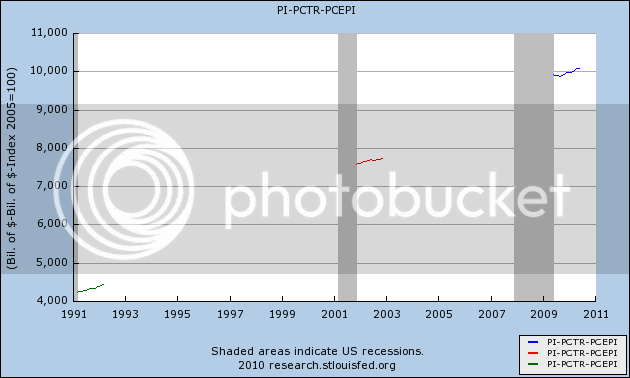 Although it is difficult to tell from the graph, real income was stronger in the first year of the recovery from the 1990 recession than at present.
That makes the final score: ECRI 5, Krugman 1.
So, will Prof. Krugman publicly acknowledge, as requested by ECRI last year, that their forecast was correct, and that contrary to his assertion then, "There[ ] really [is an] alternative to making fundamental analyses of the macro situation?"
Posted by New Deal democrat at 8:30:00 AM