Indeed, many Chinese crops set new records on Monday, including cotton, which soared 5.0% on the Zhengzhou to the maximum allowed by exchange limits, hitting a fresh record of 26,270 yuan a tonne for the benchmark May lot.

In New York, December cotton soared by more than 4% to 124.71 cents a pound, a fresh record in that exchange too.

Corn too hit a record high of 2,250 yuan ($338) a tonne on China's Dalian exchange, with farmers reported to be holding back sales amid reports that the country's harvest has not been nearly as productive as the 169m tonnes that official have forecast.

In Chicago, that erased concerns lodged by last week's data showing US weekly exports at their lowest for six years. Indeed, it raised the prospect of China returning to buy American corn.

In soybeans, also a key Chinese purchase, prices were a little more restrained on the Dalian, up 2%, and less stratospheric in Chicago too, adding 1.7% to $12.19 ¼ a bushel for November delivery, returning 4 cents or so from setting a fresh 14-month high.

The oilseed, after stagnating a bit at the end of last week, appeared to have returned to good books among speculators who, according to latest regulatory data, taken up until last Tuesday, have kept adding to their positions.

"Speculators are a record net long 145,000 contracts after adding 5,000," Australia & New Zealand Bank said, adding that open interest, the number of active contracts in soybeans, was at a record high of 904,000 too.

High levels of speculative buying can be mixed blessing, signalling interest from fast money, but also the build up of a position which could, one day, be exited fast.

Starting with wheat a few months ago, we've seen some big spikes in agricultural prices. However, will this have an impact on CPI? Here are two charts, each of which is 10 years long. They cover the last 20 years and compare the year over year percentage change in crude foodstuffs and feedstuffs with overall CPI. 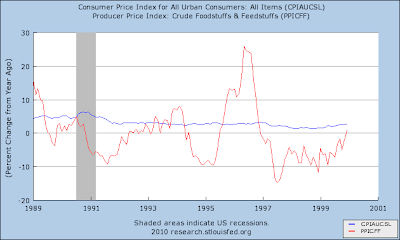 From 1989-1999 crude food and feedstuffs were quite volatile, but overall CPI was subdued. 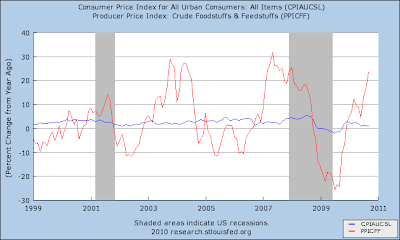 The same can be said of the 1999 to the last CPI reading.

Both of these charts show the following.

2.) The bleed through to overall CPI is minimal. That means that producers are absorbing costs of the rise in raw materials and not passing on a lot of the increases to consumers.