Lending activity was stable at low levels across most Districts, but there were some reports that demand picked up slightly. The Richmond and Dallas District reports noted increased lending activity, and Chicago said credit conditions continued to improve in the District. Reports from Richmond and Dallas suggested that competition for quality loans had picked up. Some contacts noted there was pressure to price loans slightly more aggressively.

Demand for commercial and industrial loans remained weak as businesses continued to postpone capital spending plans because of economic and public policy uncertainties. However, merger and acquisition lending picked up in a few Districts. Commercial real estate lending remained subdued and loan standards were still tight.

On the consumer side, lending was sluggish, but there were scattered reports of improvement. Contacts in the Cleveland and Dallas Districts reported growth in auto loans. Residential mortgage lending and refinancing activity increased in several Districts, and San Francisco reported an increase in demand for nonconforming mortgage loans.

Credit quality changed little on balance. New York reported a decrease in delinquency rates on consumer loans, however, and overall quality improved in the Philadelphia and Richmond Districts, according to reports.

Before we look at the report, let's take a look at some of the macro data: 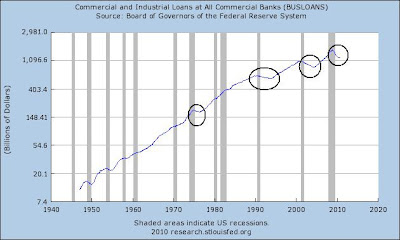 (note the chart is on a logarithmic scale) Commercial and industrial loans are decreasing, but note this is nothing abnormal for this part in the cycle. The severity of the drop during the last recession is a story, but notice that the bottom didn't drop out. 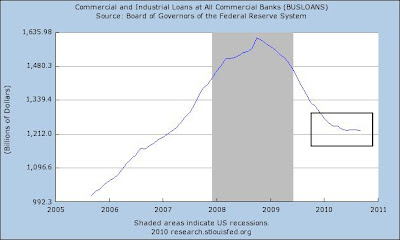 Notice the pace of C and I loan contraction is slowing. 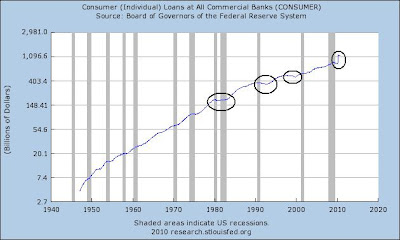 Despite the bump up due to an accounting change, consumer lending is still down. However, also note this is not abnormal either. 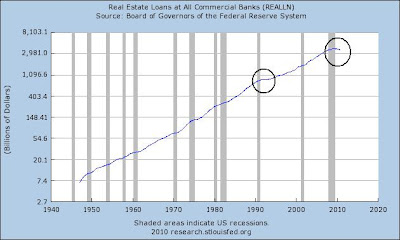 Real estate lending has also dropped a bit, but this is a bit more abnormal from a historical perspective.

Let's take a look at the anecdotal information from the report:

NY: Small to medium-sized banks report that loan demand was generally steady overall: respondents indicate a moderate decrease in demand for consumer loans and commercial and industrial loans, but a moderate increase in demand for residential mortgages; demand for commercial mortgages was little changed. Bankers also note a continued increase in refinancing activity. Credit standards are reported to have tightened for commercial and industrial loans and mortgages, with no reports of easing standards in these categories; however, banks report little or no change in credit standards for consumer loans and residential mortgages. Bankers' responses suggest some decrease in spreads of loan rates over costs of funds for residential mortgages but no change in spreads in the other loan categories. Respondents indicate ongoing widespread decreases in the average deposit rate. Finally, bankers report a decrease in delinquency rates for consumer loans but little or no change for other loan categories. Separately, contacts at credit unions indicate that credit conditions and business activity generally remain steady.

Philly: Total outstanding loan volume at most of the Third District banks contacted for this report has been level since the last Beige Book. Commercial bank lending officers said there has been virtually no change in any credit category. Bankers continued to report slack demand for both consumer and business loans. "Business loan demand is incredibly weak," one said. Another banker said, "Credit line usage is well below normal." With low demand for credit, some bankers reported increased competition among lenders, especially for business loans. Commercial bank officers indicated that credit quality has continued to improve as borrowers work down debt.

The consensus outlook among the Third District bankers surveyed for this report is that there will be minimal growth in lending until both consumers and businesses regain confidence that the economy is improving. Several bankers said that in recent discussions with their commercial customers, both business owners and managers said they are postponing expansion and other capital spending programs until current political and economic uncertainties are resolved.

Cleveland: The business-lending environment remains soft; however, almost half of the bankers we spoke with noted that demand showed some signs of a pickup across industries. On the consumer side, conventional loan demand remains very weak, with most of the activity found in indirect auto lending and home equity lines of credit. Interest rates for business and consumer credit moved by only a few basis points, with a slight bias to the downside, as competitive pressures are growing. Most of our contacts said that the demand for residential mortgage refinancing is very strong, while new-purchase mortgage originations remain at a slow pace. Residential mortgage rates continued their downward trend. Core deposits increased at almost all banks, with most of the growth occurring in nonmaturing products. Credit quality was generally characterized as either stable or deteriorating, while most reports on delinquencies indicated rates were stable or showed a modest decline. Several bankers noted that they have slowly increased their payrolls during the past few months.

Richmond: Lending activity around the District improved slightly, according to most bank contacts. Several bankers reported that the volume of new mortgage loans increased slightly in September, although one banking executive noted that most home loans went to people moving into the area. New mortgage activity at a major regional bank in the District, however, was reported as flat in recent weeks. Most bankers said that the bulk of mortgage lending was for refinancing, and one loan officer noted that refinancing activity stopped abruptly whenever the smallest uptick in mortgage rates occurred. Industrial loans were up slightly for equipment as well as inventory, according to one lender, while another banker reported very little commercial real estate lending. Several bankers stated that the competition among banks for quality loans was increasing. An officer reported that his bank had lowered rates to recapture auto dealer floor plan loans that had been lost to larger, more aggressive banks. An increase in merger and acquisition activity was widely reported. Several bankers cited examples of companies with strong balance sheets that were buying weaker competitors. Most bank officials reported improved credit quality, with a decline in both the number of foreclosures and late payments.

Chicago: Credit conditions continued to gradually improve in September. Contacts indicated that the corporate financing environment remains very favorable, but the availability of credit for small businesses remained a source of concern for some. Business loan demand was steady, driven mostly by refinancing and merger and acquisition activity. Recent tax law changes and increasing pressure from shareholders to productively employ the large amounts of cash on firm balance sheets were seen as contributing to the latter. Furthermore, a contact noted that private equity funds that are required to invest funds by year-end or return them to investors were another likely factor. Investment demand for distressed commercial properties remained strong. Moreover, limited improvement in the availability of bank loans for commercial real estate was noted, although it was concentrated among a few banks.

KC: Bankers reported steady loan demand, stable deposits, and an unchanged outlook for loan quality. Consistent with the last several reports, overall loan demand was little changed. Demand edged up for commercial and industrial loans and residential real estate loans but decreased for consumer installment loans. Demand for commercial real estate loans was stable. Credit standards were unchanged in all major loan categories, after tightening modestly on commercial real estate loans in the last two reports. Somewhat more bankers reported deterioration in loan quality from one year ago than reported an improvement. However, for the fourth straight report, respondents expected no change in loan quality over the next six months. Deposits were basically flat, continuing the pattern since late last year.

Friso: Reports from District banking contacts indicated that loan demand was largely unchanged compared with the prior reporting period. Demand for commercial and industrial loans continued to be restrained by businesses' cautious approach to capital spending and desire to deleverage. Consumer loan demand also remained weak overall, although contacts noted an uptick in demand for nonconforming mortgage loans. While lending standards stayed relatively restrictive for business and consumer lending, the reports suggested some loosening of credit standards for select groups of borrowers. Contacts also pointed to an uptick in financing for corporate acquisitions as well as further modest expansion in IPO activity.

Here are some observations, in no order of importance: