Two days ago in the first installment of this little series I pointed out that the typically reported jobs metric, Nonfarm Payrolls, was not keeping up with almost every other measure of job growth, including private sector jobs, the Household Survey, aggregate hours worked, temporary hires, and the results generated by examining payroll tax withholding. Here's the most applicable graph in case you needed a reminder: 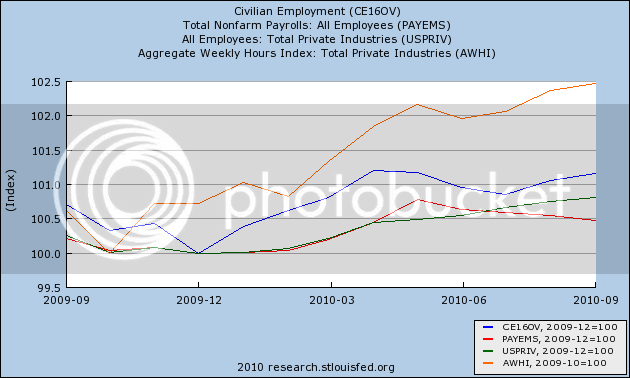 Yesterday I took a more in-depth look at tax withholding, refining the implications of YoY changes in monthly and 12-month incrments. In that post, I noted that Rebecca Wilder had examined the issue also at the Angry Bear. She concluded:

Hours and employment are improving, supporting wage gains and higher tax receipts. But more importantly, the pace of tax receipt growth has not faltered, demonstrating ongoing recovery in the labor market and consumer demand.

But it's not enough. The gains in tax receipts are likely a function of firms adding back hours instead of pumping up the work force. (see my previous post with links on the "hourless recovery").
....
Both series [aggregate hours and nonfarm payrolls] found a trough in the third quarter of 2009, which is consistent with the bottom in tax receipt growth (chart above). However, the hours index has recovered quicker than has its payroll counterpart....

I respectfully disagree. To show why, let's take a look at the historical relationship between aggregate hours and payrolls: 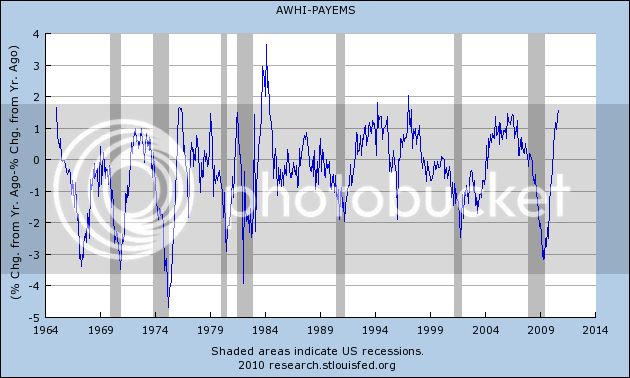 As the above graph shows, it is typical for aggregate hours to outpace payroll growth in YoY% terms in the early part of a recovery. As the expansion matures, payrolls grow faster than aggregate hours worked. The situation now is not atypical at all, particularly when compared with past deep recessions such as 1974 and 1982.
The reason, it appears, is pretty straightforward. Aggregate hours worked is a more volatile series than private sector job change, which is similarly more volatile than total payrolls (which include government jobs). This is shown for the last 10 years in the following graph: 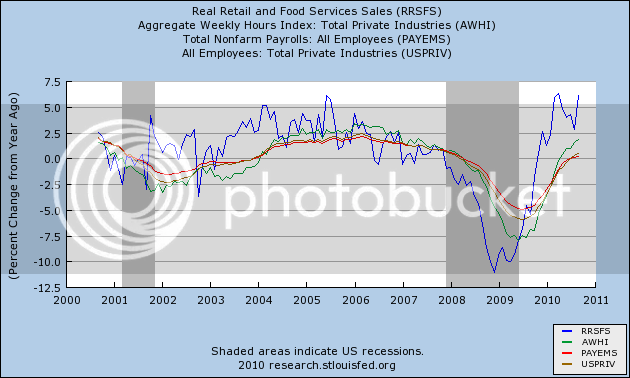 and here it is for the 35 years before that: 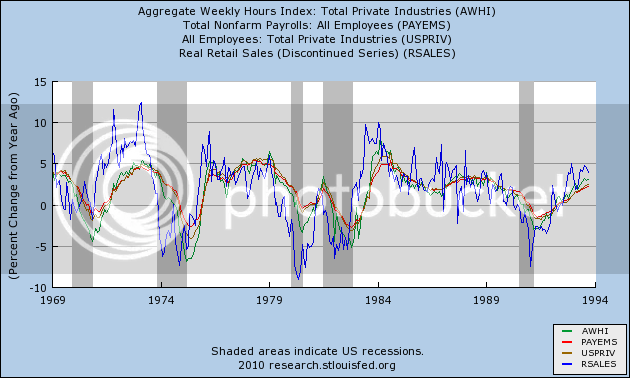 Perhaps surprisingly, it isn't the beatdown being dished out to government jobs that is the difference. Aggregate hours compared with private sector job growth also shows a similar pattern now as compared with recoveries from the steep recessions of 1974 and 1982: 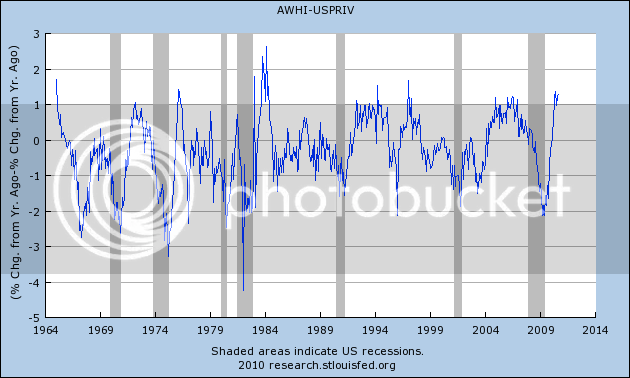 Additionally, despite the difference in growth off the bottom, on a YoY% basis, the household survey and nonfarm payrolls are quite close to one another: 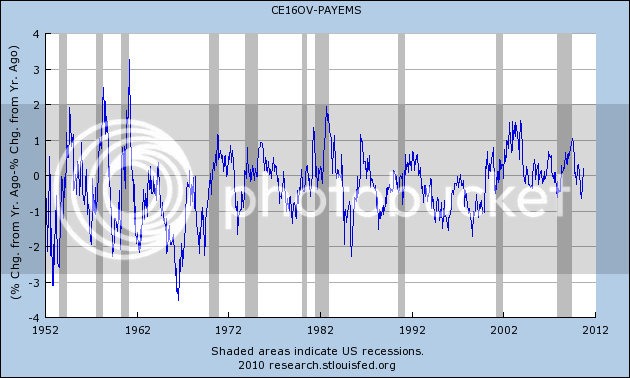 What is magnified this time is the difference between real retail sales and the Household survey, especially late last year: 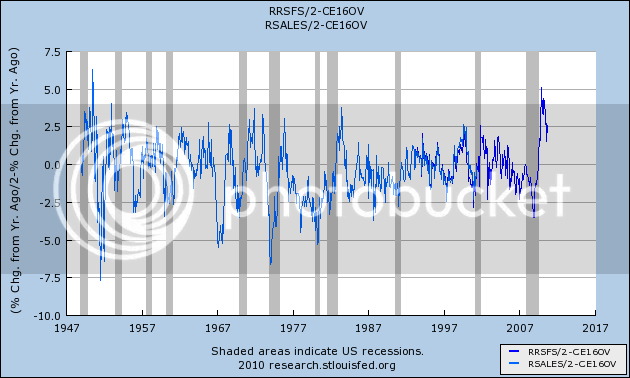 There has also been a magnified disconnect between growth in real retail sales and nonfarm payrolls. While it does mirror recoveries from past steep recessions: 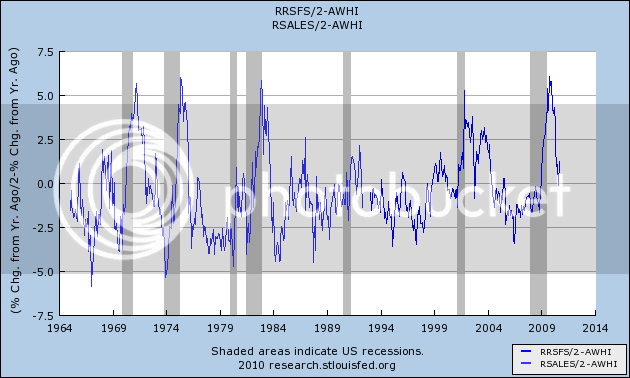 What is particularly noteworthy in the above graph is what happened in the 2002-03 period, more than a year after the bottom of the dot-com recession of 2001. Retail sales briefly faltered in late 2002, and then picked up again - but employment didn't, leading to a period of elevated lags in YoY growth on the order of 2.5%. In all prior cases consumption and employment fell in line no later than one year after significant improvement in retail sales. This is a unique pattern (so far) since the end of World War 2.

In conclusion, as noted yesterday, it seems likely that Nonfarm Payrolls, at least from March 2010 forward, will probably ultimately be revised upward at least slightly, more in accord with the growth of tax withholding and the Household Survey. But much more significantly than that, given the recent resurgence in the US' trade deficit, it seems most likely that if the disconnect between real retail sales growth and job growth as measured by both the Household Survey and Nonfarm Payrolls is probably best explained by the continuing effects of offshoring, as the US stimulates job growth in Asia.
Posted by New Deal democrat at 9:30:00 AM