The NBER and dating Recessions and Recoveries: contra Calculated Risk

- by New Deal democrat
[Note: I drafted this early last month, but withheld publishing it, because it seemed "defensive." Although both Bonddad and I have written that the "great recession" ended in summer 2009, and we have been in a "recovery" since (as in economic indicators, while still bad, have improved off their bottoms), the NBER will obviously do whatever it will do. But because CR's note has been cited as authoritative, the below critique appears valuable.]

Bill McBride a/k/a Calculated Risk caused something of a stir at the beginning of July with his suggestion that, should there be a double-dip, then the NBER would probably judge it a continuation of the Recession that bottomed last June, with no intervening recovery. While I have the utmost respect for CR, and I have corresponded with him and obtained useful information from him, that doesn't mean I can't respectfully disagree. And in this case, I do.

Let me preface my reasoning with a simple, straightforward statement: this is only a question of semantics. The data is, what the data is. It is either improving or declining. Regardless, few would disagree with the blunt statement that the economy is bad, the job situation is bad, and except for CEO's and Wall Street, income is bad. Nothing in the rest of this post changes any of those statements.

CR's analysis is premised on the statement from the NBER that they did not consider the 1981-82 recession a continuation of the 1980 recession because all the important data measures had exceeded their pre-1980 highs before the second recession began. Unlike CR, I do not consider that the end of the argument. There is a difference between necessary and sufficient conditions for an event. I regard the NBER statement as indicating that the measures were sufficient to determine that there was a second, separate recession. Thus they did not have to engage in further analysis. In short, I do not believe they indicated that those criteria were necessary.

That being said, there are 5 reasons why I believe CR is incorrect:

1. Even in 1980-82, two data points -- industrial production and real retail sales -- failed to achieve their prior highs before the second half of the double-dip.

2. Similarly, in 1938, at least two measures failed to reach their 1929 highs before falling again.

3. The NBER did not wait for all measures to exceed their pre-recession highs -- far from it -- when in July 2003 they declared the 2001 recession over.

5. The simple length of the improving data argues that the recovery, even if it ultimately fails, has been real.
Let me explain in greater detail:

1. Even in 1980-82, two data points -- industrial production and real retail sales -- failed to achieve their prior highs before the second half of the double-dip.

CR relies on four measures to make his point: Real GDP, Industrial production, Payrolls and Real Income. As shown in the graph below, however, one of the four measures -- industrial production -- never did reach its pre-1980 recession high before the 1981 recession began. So right from the outset, we know that the failure of at least 1 critical measure to reach its pre-recession high does not rule out a real recovery.

But there is more. For some reason, CR doesn't include real retail sales, although the NBER definition of what a recession is, specifically includes retail sales. Along with industrial production, real income, and payrolls, it is thought to be one of the determinants for the NBER's decision. And real retail sales failed miserably in the brief recovery between the 1980 and 1981-82 recessions, recovering only about 1/3 of their ground (about 4.5%): 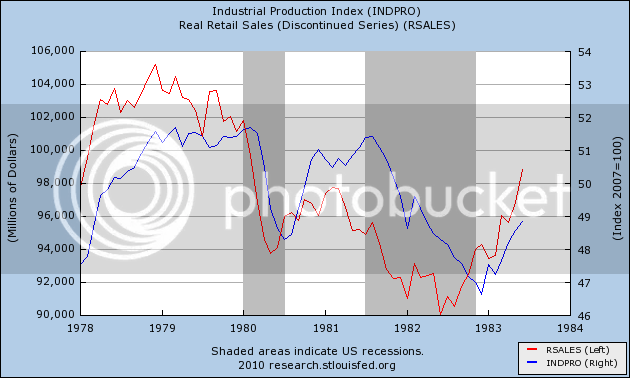 Contrast that with the present situation, in which GDP has recovered about 3/4's of its loss, industrial production has regained more than half, and real retail sales have recovered about 40% of their losses since the pre-recession peak: 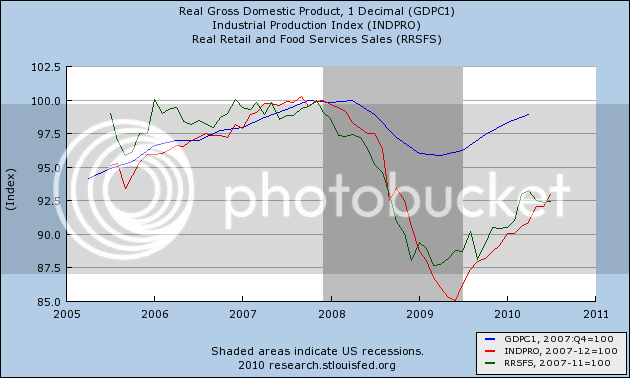 So, even considering the 1980 recession itself, it appears that 3 of 5 important measures meeting their prior highs is sufficient.


2. Similarly, in 1938, at least two measures failed to reach their 1929 highs before falling again.

The failed 1980 recovery isn't the only counterexample. During the Great Depression itself, the 1937-38 recession took place at a point when at least two indicators had failed to return to their 1929 peaks. While GDP and industrial production had indeed regained all of their lost ground from 1933-1937 (Amity Schlaes and New Deal deniers take notice): 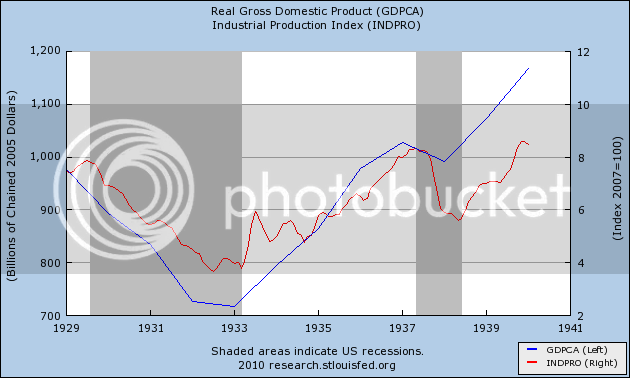 While I can't show it to you graphically, accoding to the Statistical Abstract of the United States, 1939, pp. 311-312, neither real income nor payrolls had come close to equalling their 1929 highs, in both cases having made up only about half of the ground. Despite this, 1938 is not considered a continuation of the 1929-32 downturn. Rather, it has been dubbed "The recession within the depression." In other words, the 1938 recession, which did not establish new bottoms worse than the 1932-33 bottoms, was considered an interruption in the recovery from those lows, rather than an extension of the previous downturn. If a new downturn should begin that does not return us to the 2009 lows, there is no reason to consider it part of that same recession, for the same reason.


3. The NBER did not wait for all measures to exceed their pre-recession highs -- far from it -- when in July 2003 they declared the 2001 recession over.

The NBER declared that the 2001 recession was over in July 2003. Here is how real GDP, industrial production, payrolls, and real income looked as of that month: 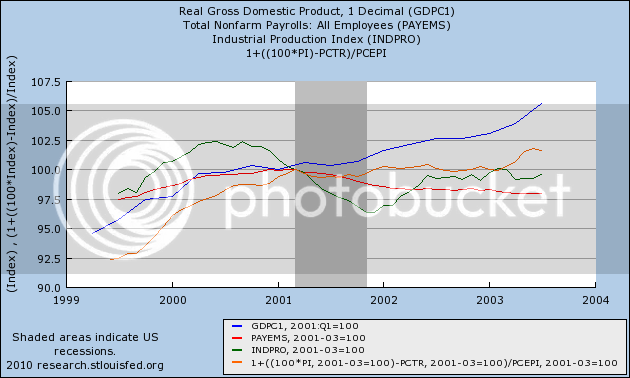 Note that GDP never really even took a hit during that recession. It declined in 2 of 3 quarters during 2001, but finished the recession higher than the point at which it began! By July 2003, real income had also regained its lost ground. But industrial production had at best made up 2/3 of its lost ground, and employment was still in decline! Despite all this, the NBER declared the recession over. (The 2001 recession was a business investment recession, real retail sales never actually declined in any sustained fashion).

CR believes the NBER will consider the strength of the growth against the power of the previous decline. Should they? They certainly make no such relativistic declaration in any of their definitions of recession and recovery. So let's compare the strength of the current growth with that of the 1980 and 2002-03 recoveries discussed above:

Since bottoming in 2009, real GDP is up about 3%. Industrial production is up 8%. Real retail sales were up 6.5% as of May. Real income is up about 1.5%. Only payrolls continue to stink, up only about 0.5% from their December bottom.

A year after the end of the 2001 recession, by contrast, GDP was up about 2%. Industrial production was up 3%. Real retail sales were actually still down slightly, about -0.5%! Real income had at most been up 1.5% . And of course, payrolls were still declining. If in 2003, the NBER could consider that a period of recovery, then it certainly ought to count as a period of recovery now.

Comparing with one year after the 1980 recession, GDP was up 3.5%, industrial production was up about 6%, real retail sales were up at most 4%, real income was up 10%, payrolls were up 1.5%. While real income surpassed its current growth by a very strong margin, and payrolls were significantly better, both GDP and industrial production growth were similar, and of course, real retail sales was not nearly as good as present.

In short, the strength of growth in the last year is similar to that which in the past the NBER has said constituted a recovery.

5. The simple length of the improving data argues that the recovery, even if it ultimately fails, has been real.

Finally, leaving the subjective judgments of the NBER aside for a moment, the length of the growth since last year is such that a more simple, objective approach argues that it qualifies as a recovery. Generally, in lay terms it is frequently said that a recession is 2 quarters of negative growth. The 2001 recession stretched that definition because the 2 quarters were separated by one quarter of growth. If we go by this simple rule, then two consecutive quarters of growth after a period of contraction ought to count as a recovery. We've already had 3, and everyone expects that the second quarter of 2010 will also be shown to have grown, making it four quarters in a row. For good measure, we've also had 4 quarters of growth in industrial production, 3 quarters in real income, 2 in payrolls, and 5 in real retail sales. If we lay aside subjective judgments and go by the math, that's a recovery, pure and simple.

CR argues that the NBER uses a relativistic approach to dating recoveries. But if growth is judged not on its absolute strength, but only relative to the decline that preceded it, then why shouldn't the same be used for declines? How could a relativistic approach justify calling what happened in 2001 a recession at all, since compared with prior growth, it was a hiccup, and consumers blazed right through? Why should we have a relativistic measure for one side of the coin - growth - but not the other side - decline?

And if we are to use a relativistic approach, consider what that means for the 1930s. The NBER would have had to wait until all the data from 1937 was in, in 1938, to declare that the Great Recession ended, in business cycle terms, 5 years earlier in March 1933! Is there anyone at all who thinks that is a useful approach?
In Conclusion, obviously we can't know what the NBER will do. And, to reiterate above, we are only dealing with semantics, not facts on the ground. But there is good reason to believe that if the NBER is to be consistent with its earlier datings, once it is satisfied that any new downturn will not return us to the lows of the 2008-09 downturn, it should declare that recession ended in the later part of 2009.
Posted by New Deal democrat at 1:30:00 PM