A Note on the Leading Economic Indicators

As I have frequently pointed out, the KISS method to be right about the economy over the next 3-6 months is simply to follow the LEI. In the past it has been documented that you won't always be right, but you'll be right a lot more often than those who claim to engage in fundamental analysis" or simply rely on what other pundits say.

H/t to Briefing.com, here is the LEI for the last 24 months:

As you can see, they were already in steep decline in July 2008, two months before the "Black September" crash in the economy. They turned up in April 2009, 3 months before the economy as a whole bottomed. For the last four months, the best way to read them in terms of the immediate future is, converging on zero. Typically it is said that a decline in the LEI of three straight months signals a recession: we simply aren't there yet.

Additionally, here is a screenshot, again from briefing.com, of the reading of each indicator for the last 5 months: 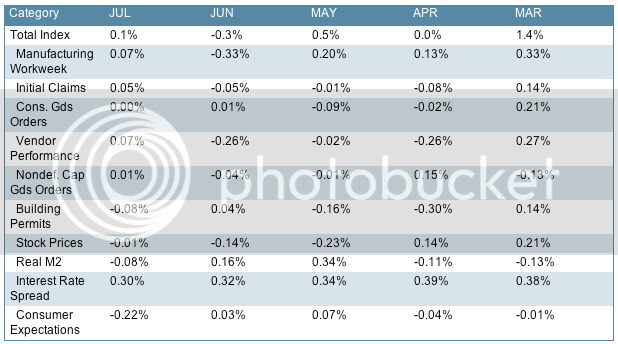 Once again, you would be hard put to discern a trend in any one of those indicators. In any given month, a random member of the group is decisively up or down, and has not moved continuously from month to month. Again, what we see is, convergence on zero.

Finally, here is a graph (ending in early 2009) of a 6-month diffusion index of the indicators:

The point of this index is that, to signal recession or recovery, at least 8 or 9 of the 10 indicators should all be moving in the same direction. We are nowhere near that yet. So far, only 3 -- ISM vendor performance, building permits, and consumer expectations -- may be negative for 6 months. Stock market performance is on the edge. Initial claims may well have tipped as well, as of yesterday.

But that simply does not signal recession, rather than a slowdown, yet.
Posted by New Deal democrat at 10:00:00 AM