Initial claims are piling up, indicating that businesses are continuing to cut costs. Initial claims came in at 500,000 in the August 14 week for the largest total since November. The four-week average of 482,500 is the largest since December. A month-to-month look shows significant deterioration of 25,000 for a percentage change of nearly six percent. The Labor Department said special factors are playing no part in the data.

But not all the news is negative. Continuing claims continue to come down, down 13,000 in data for the August 7 week. The four-week average of 4.527 million is the lowest of the recovery.

Today's report points to trouble but not catastrophic trouble for the monthly employment report. Note the rise in initial claims betrays a lack of business confidence in the economic outlook. Stock futures are moving lower following the report while money is moving into the safety of Treasuries. 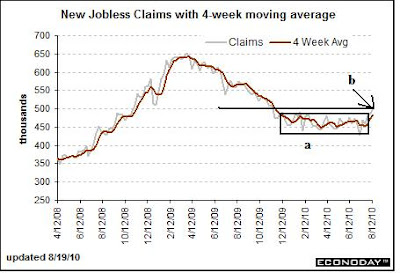 This number was coming down during the last six months of last year . However, the number has stalled for this year (a) and is now at the 500,000 level (b). While I agree with NDD that the lack of underlying data means this could be a temporary increase caused by Census/governmental/construction losses, the reality is the total number could not come at a worse time. We've been seeing weakening numbers from the manufacturing sector for the last few months (see today's -7.7 print from the Philly Fed), indicating this sector -- which led us out of the recession -- is losing steam. Now we have initial unemployment claims at a big, fat round number: 500,000. That is terrible news with little to no upside in my opinion.

After four quarters of GDP growth, we're seeing clear signs of weakness.
Posted by Unknown at 10:35:00 AM