Jason Fichtner, an associate commissioner at the Social Security Administration, said the weak economy has led more people who lost their jobs to retire early. However, it also has forced some people hard-hit by the recession and in need of a bigger paycheck to push back retirement and stay in the work force longer.

This is an interesting trend that has important ramifications for the labor force. This is also a good time to run through some of the basics of employment statistics. The biggest population in the BLS survey is the civilian non-institutional population, which is:

... persons 16 years of age and older residing in the 50 States and the District of Columbia who are not inmates of institutions (for example, penal and mental facilities, homes for the aged), and who are not on active duty in the Armed Forces.

A sub-category of this group is the civilian labor force, which is, "all persons classified as employed or unemployed in accordance with the definitions contained in this glossary."

The difference between the non-institutional population and the civilian labor force is the category "not in the labor force," which

Includes persons aged 16 years and older in the civilian noninstitutional population who are neither employed nor unemployed in accordance with the definitions contained in this glossary. Information is collected on their desire for and availability for work, job search activity in the prior year, and reasons for not currently searching.

Consider this chart from the St. Louis Federal Reserve of the Labor Force Participation Rate: 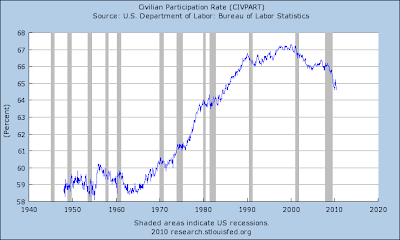 Note that it increased starting in the early/mid 1970s and continued to increase strongly until the early 1990s. Then it levels off, increases a bit more as a result of the near full employment in the 1990s, but then starts to move lower at the beginning of the decade. The number also takes another drop in as a result of the recession, which is explained above.C onsider that this arc traces the employment path of the baby boomers.