Does anyone think these people filed for unemployment benefits?

Yesterday and today, I've been addressing the conundrum that virtually every measure typically used to measure employment (temporary hires, tax withholding) suggests we ought to be having much stronger payroll gains than we have had this year. Over at The Big Picture, our sometimes-coblogger Invictus has noted the same with regard to the ISM manufacturing index and durable goods orders as well in the last few weeks. This post adds to that picture.
One question, asked with renewed urgency after yesterday, is where are all the weekly new jobless claims coming from? They aren't broken down by industry or service, so we have been left to guess. There may have been a distortion to the good side in July from auto workers not being laid off by GM. There almost certainly has been some effect to the down side of Census workers filing (eligibility varies from state to state, and as this post excellently argues, it may pay some of the workers to wait several months first -- if they can survive).

But with several months of initial jobless claims increases to look at, and several subsequent nonfarm payrolls reports, let's take a look at this convenient breakdown via briefing.com: 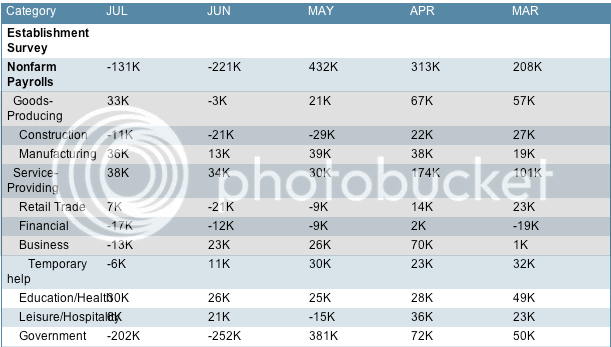 Notice the virtually ALL of the decrease in employment for the last few months has come from 3 sources: (1) government workers, including census workers (about 368,000 laid off) and also state and local employees (another 86,000). This has been 80%-90% of the downdraft. The remaining part is split between (2) construction (-32,000), and (3) finance (-29,000) -- but the finance layoffs haven't been in Wall Street finance, a closer look at the BLS breakout reveals about 1/3 of them to have been in real estate finance.

In other words, almost all of the non-census downdraft in payrolls has been from the two stimulus programs that ended in April-June: the $8000 home buying credit, and aid to the states. Do you suppose most of those people applied for jobless benefits? If so, that easily explains almost the entire stalling and upturn in those numbers.
Put another way, part of the downturn in employment that would have normally taken place a year ago, making 2009 even worse, is instead taking place now. If so, all else being equal, it is more likely to be the tail end of the job loss hurricane, rather than the onset of a new one.
While collectively my posts yesterday and today explain where the biggest weaknesses are located, and part of the reason why, there is a decisive aspect of the sudden slowdown since April that needs to be addressed, and is not going to be addressed by the economics profession. With that tantalizing clue, more (hopefully) Monday.
Posted by New Deal democrat at 11:30:00 AM