For the last week or so, the market has been unable to overcome key resistance levels. That trend continued yesterday.

The SPYs are still finding extreme resistance in the 113 area.

The inability to make a strong move higher occurs despite a strong rally yesterday. Prices opened lower (a), bumped along the bottom (b) but then rallied strongly (c) after the Fed announcement. However, there was strong end of the day selling on high volume (d).

The daily chart shows where resistance lies (a). However, prices are still in an uptrend (b) and the EMA picture is still very bullish (c).

On the QQQQs, notice that prices are still under resistance (b), but prices are forming lots of small candles (a), indicating a lack of conviction in either direction.

The IEF (7-10 year Treasury) chart is still incredibly bullish. The primary uptrend is still in place (a) and the EMA picture is as bullish as it can get (b) - the shorter EMAs are above the longer, all the EMAs are moving higher and prices are above all the EMAs. Also note that prices have continued to move through resistance for the entire rally. 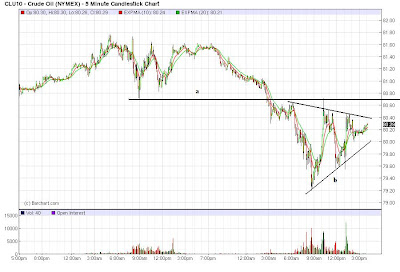 Yesterday oil fell through important support levels (a) and consolidated in a triangle consolidation pattern (b). 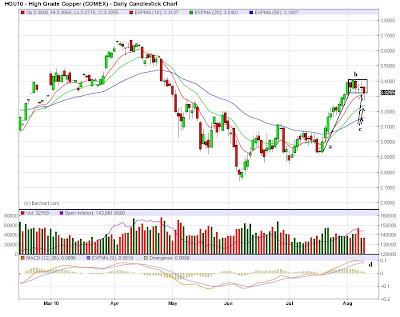 Copper's daily chart shows that prices have broken an uptrend (a) and are consolidating (b). However, the EMA picture is still strong (c). 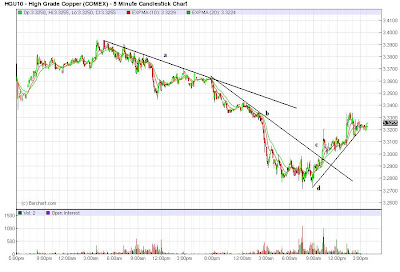 But on the five minute chart there are some strong downtrends (a and b). However, prices have broken trend (c) and started a slight uptrend (d).
Posted by Unknown at 5:00:00 AM