When the latest installment of the Rockefeller Institute's report on state finances [pdf] came out a couple of days ago, I read the whole thing, saw a few items I figured would be catnip to Mish, and wondered how long it would be until he took the bait. It turned out it was all of two days. His conclusion:

Improvements in revenue collection are mostly if not entirely due to tax increases and other legislative changes such as California speeding up income tax collection rather than an increase in retail sales as widely touted.

Wrong. The Rockefeller report does not confirm Mish's assertion that retail sales have failed to pick up. In fact, quite the reverse, it validates the May increases I wrote about last week.

As an initial matter, Mish sets up a straw man. Nobody said that the increase in general state revenues was due to increased retail sales, and Mish cites no such source. Rather, Mish had claimed that increases in retail sales were an illusion, and proven by (unexamined) state sales tax revenues. As we saw last week, that blew up in his face once we examined actual May revenues -- and the tax increases he cited in rebuttal didn't actually apply.

Secondly, if you read Mish's article carefully, despite the fact that he allegedly discusses the issue of retail sales and sales taxes, the vast majority of the text dicsusses income taxes as well as property and corporate taxes and general revenues. Very little attention was actually paid to what he claimed to be discussing, namely, sales taxes. In fact, the text of the Rockefeller Institute report spends just three paragraphs on sales tax revenues:

Preliminary figures for the 37 of 45 early reporting states with broad-based sales tax indicate that sales tax collections saw some positive growth at 6.0 percent in April-May 2010 compared to the same period of 2009. While June data could change the picture, sales tax growth in the April-June quarter is not unexpected, as a result of stabilizing retail sales and consumption as well as legislated changes in several states.

Here are most important bullet facts you need to know:

1. What month is it now? (I'll wait while you check): July 2010.
2. What month sales tax returns did I report on last week? May 2010.
3. What months does the Rockefeller Institute report cover? January-March 2010
4. When did the tax increases, especially in California, take place? April 2009

Armed with these facts, let's look at the Rockefeller report.

The first item to notice is how the year-over-year comparisons continue to get better. This is one of four graphs Mish cites, and the only one actually relevant to sales taxes: 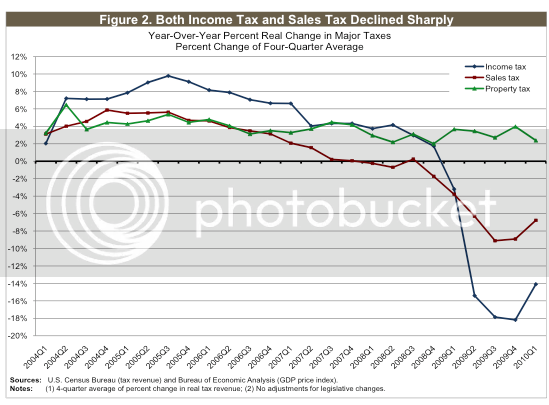 That graph plainly shows that there has been a turnaround in the trend of YoY sales tax revenues. But the graph itself is even more lagging than that. It show the YoY change in a rolling 4 quarter period of revenue collections. In other words, the last data point covers the entire period of Q2 2009 through Q1 2010, including the very trough of the recession.
The actual YoY change quarter by quarter is not shown in any graph, but only in this chart: 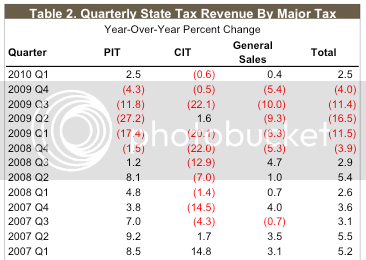 As Mish himself acknowledged when he first wrote about this in February, you have to compare sales tax receipts year over year, because there is a lot of seasonality, making month over month comparisons very dicey. The Rockefeller Institute agrees with this. Nevertheless, note that mathematically the actual bottom month had to be at some point during that 12 month period, not at the end (or by definition there could not have been a YoY increase). Most likely the actual bottom in sales tax collections was during the worst YoY quarter, i.e., Q3 2009, and sales tax receipts have been growing since then -- lagging retail sales as measured by the census bureau by 3 to 6 months, which was to be expected (given the lag in reporting sales, and the fact that sales tax is usually not paid on necessities).

So the trend in year over year tax collections was getting better and better, and slightly positive by the time the first quarter ended. That's as far as the actual data in the Rockefeller Institute report takes us. If the year over year trend simply continued, it would mean that state sales tax revenues would rebound nicely in the second quarter.

And of course, by now we have reports of state revenue collections through May. When I originally blogged about Mish's mistake, it was right in the middle of the first quarter, about which the Rockefeller Institute is now reporting. So I dug out the year over year comparisons of sales tax revenues at that time and showed the year over year trend for those months. So I can now add in May to that trend, for the same 11 states that Mish made use of back in February. Here's what the state sales tax receipt data shows:

There is simply not the slightest doubt that the year over year trend of improving sales tax receipts from the first quarter continued to improve in the second quarter.

But,,, but,,, but,,, Mish countered last week, there were sales tax increases in places like New York City and California, so the May increases shouldn't count. Except, as I pointed out in rebuttal, those tax increases came into effect in April 2009. Therefore the DO affect year over year comparisons that include both March and April 2009 (included in the period covered by the YoY comparisons in the Rockefeller Institute report, but DON'T affect the comparisons for tax receipts that started thereafter, such as May 2009-May 2010, because the same tax rates were in effect for the entire period!

1. The increasing YoY trend of state revenues has been confirmed by the Rockefeller Institute through March 2010.
2. We know from the raw data from the states that the trend DID continue through May 2010.
3. We know that the May 2010 data is unaffected by tax increases that took place before May 2009.

The increase is state sales tax revenues is real. Mish's "rebuttal" to that fact is a mirage.

While in California "through December, the state’s tax revenue take was down 13.7 percent to $7.25 billion," January's tax receipts were UP YoY, and in particular "Sales Tax came in about 80% higher than January 2009." which one California blogger called "finally a ray of hope that California is turning the corner on the recession."
NOTE: This post went up a little early. I'll update in a subsequent post with all of the state tax information, better formatted. The bottom line remains, unless and until someone finds huge tax increases that started after April 2009, the YoY comparisons of May 2009-10 are valid, are in accord with the Rockefeller Institute's analysis, and refute Mish. - NDD
Posted by New Deal democrat at 12:30:00 PM