The Empire State Manufacturing Survey indicates that while conditions for New York manufacturers continued to improve in July, the pace of growth in business activity slowed substantially over the month. The general business conditions index remained positive but fell 15 points, to 5.1.The new orders and shipments indexes were also positive but lower than last month’s levels. Employment indexes dipped as well, with the average workweek index falling below zero for the first time this year. The prices paid index was positive and held steady, while the prices received index declined to a level just below zero. The future general business conditions index was little changed, remaining close to its May and June levels but below the highs seen earlier in the year. The index for future number of employees fell markedly, although it remained above zero. The capital spending and technology spending indexes were also positive, but both were well below the peak levels reached in May.

From the Philly Fed:

According to the firms polled for July's Business Outlook Survey, regional manufacturing activity continues to expand but at a slower pace than in June. The general activity index decreased to 5.1 this month, down from 8 in June.

The firms reported a decline in new orders this month compared with June. However, employment showed a slight improvement over last month. Firms do expect to see growth in business over the next six months but are less optimistic than in previous months. 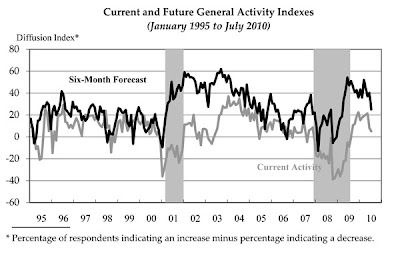 With both of these regional indicators, the indexes are still positive. But they are coming close to contraction areas which is not comforting.
Posted by Unknown at 11:30:00 AM