Here is a chart of the last year of data from the St. Louis Federal Reserve: 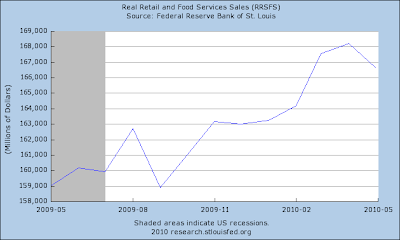 That is not the most inspiring data trend. In corresponds to the results of the latest Bloomberg poll:

More than half say they are responding to the economic climate by hunkering down. Fewer than a quarter say they are getting back to normal and only 16 percent are seeing opportunity and taking risks. The public’s posture is more pessimistic than the view of global investors polled a month earlier. In a poll of Bloomberg customers conducted June 2-3, more than twice as many respondents -- 35 percent -- said they are seeing opportunities and taking risks.