Oil Prices and the Recovery 2

Last week I said that I was re-evaluating my overall view of where the economy was heading for the first time in over a year. Having put some further thoughts into the matter, and having exchanged several fruitful emails with Professor James Hamilton of Econbrowser and Bill McBride a/k/a Calculated Risk, I do feel that I have a better grasp of the situation.

I do believe the economy is at something of a crossroads. In terms of reading the tea leaves, we may well have the crucial information that will determine its direction within the next several weeks.

In general, the economy is being buffetted by at least 5 more or less coincidental events: the crisis in the Euro, the ending of the home buying credit, the Oil cataclysm unfolding in the Gulf of Mexico, the withdrawal of stimulus from the states and from the long term unemployed, and the aftereffects of the run-up in the price of Oil in the last 18 months from $37 to $88 a barrel.

I've addressed the issue of the crisis in the Euro already, and my thoughts there haven't changed. Today I want to take a further look at the effects of the price of Oil on the recovery.

It has been noted by Oil analyst Steve Kopits, as shown in the graph below, that when the price of Oil causes consumption expenditures to exceed 4% of GDP, a recession has always followed: 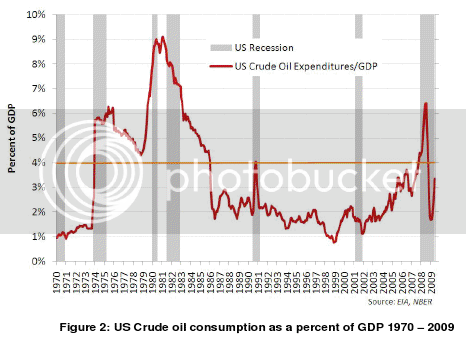 That didn't happen now, but we came within a whisker for a few weeks in April. So I wondered if a similar situation -- of Oil approaching but not crossing 4% of GDP -- had occurred in the past. The answer is staring us in the face in the above graph: it did, and it wasn't long ago, either -- a very similar thing happened in 2006.

First off, here is a long term graph of GDP (red) and the inflation-adjusted price of Oil (blue), normalized so that the two lines cross at the 4% mark (which happened exactly at the height of the oil shock in 1990 when Saddam Hussein invaded Kuwait (essentially this shows the same information as the graph above, but in slightly different form, and updated through April 2010): 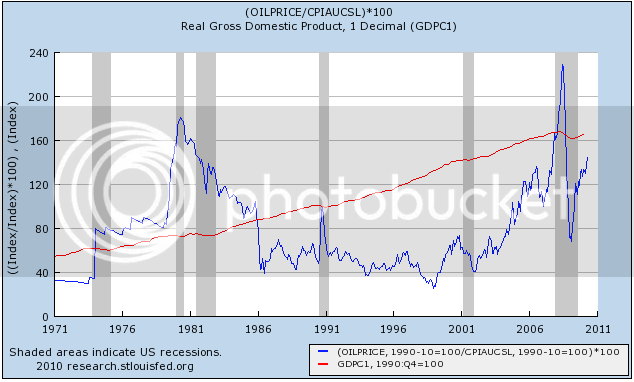 You can see that the price of Oil came quite close to 4% of GDP in mid-2006 before suddenly declining through November -- a very similar value, and a very similar move to what is happening now (note that since we don't yet have the CPI for May, the Oil price graph does not reflect the nearly $20 decline in the price of Oil last month.

In addition to the price of Oil, growth in "real" M1 and M2 were similar to what they are now: 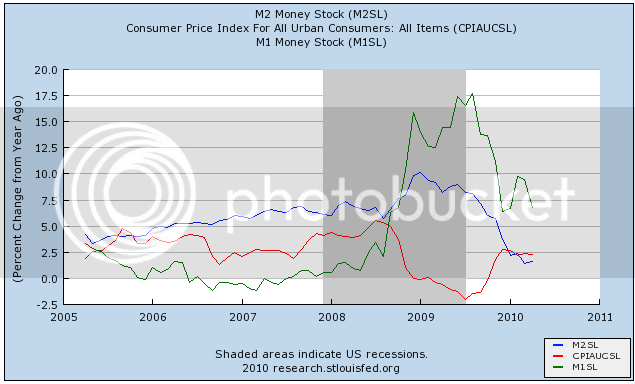 The difference being that in 2006, real M1 was negative and real M2 was barely positive. This year real M2 is negative, and real M1 is positive but decliningly so since February.
Professor Hamilton has generally indicated that the effects of changes in the price of Oil show up first, after just a few (3 or 4) months, in auto purchases, and PCE's in about 6 months. These in turn have the maximum effect on GDP about 6 months later, or 12 months after the change takes place.

In that regard, here is a graph of the price of Oil (blue) and absolute real GDP (red) for the last 5 years. Note that in 2006 as the price of Oil approached the 4% of GDP mark, real GDP stalled for one quarter, literally growing at almost an exact 0% pace, before accelerating again as Oil prices fell going towards the end of the year: 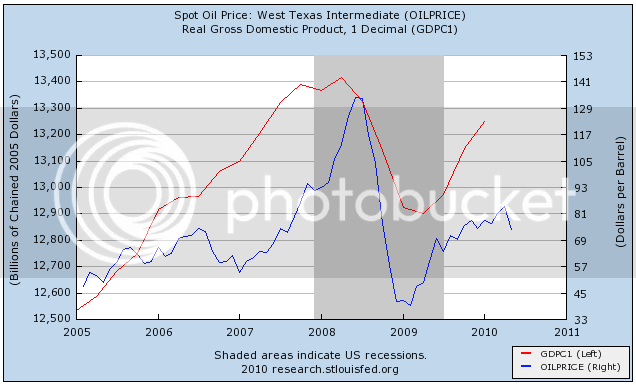 Although I haven't reproduced the graph here, employment growth also nearly stalled, with several months of about 50,000 in gains just as the price of Oil hit its peak.
In other words, all else being equal, we should expect GDP to nearly stall either this quarter or next quarter in response to Oil prices being in the $80-$90 range in March and April. Should the decline in prices last for at least several more months, all else being equal we should see increase auto sales and a re-acceleration of GDP.
Of course, not everything else is equal, for the reasons stated at the outset of this post. In a day or two, I'll explain what data will be most important to me in the next couple of weeks that may tell us in which direction the economy will likely proceed.
Posted by New Deal democrat at 9:30:00 AM