On June 9, The Federal Reserve released the Beige Book. This is a great document, as it provides a comprehensive overview of the US economy. It also includes anecdotal information. It's important to remember that each Federal Reserve District is intimately involved with its district's economy -- Fed Presidents and Fed staff are constantly talking with business leaders to get an idea for the region's health. As such, this document is very similar to a GDP report.

Consumer spending improved from the previous report. Spending continued to be concentrated in necessities as opposed to discretionary big-ticket items. Retail sales increased in April and May, although several Districts noted that the gains were uneven across months. Sales of spring and summer apparel were strong in the Boston, New York, Philadelphia, St. Louis, Kansas City, and Dallas Districts. Sales of home improvement and lawn and garden equipment were reported to have strengthened in the Richmond, Chicago, and San Francisco Districts. Modest improvement in sales of discretionary home goods was noted by Cleveland, Kansas City, and San Francisco. Vehicle sales also rose, but the rate of increase reportedly slowed in May in the New York, Cleveland, and San Francisco Districts. Tourism activity improved. Dallas reported a continued increase in leisure air travel. Hotel occupancy rates rose in the New York, Atlanta, Chicago, Kansas City, and San Francisco Districts, and convention activity increased in Atlanta and San Francisco. Richmond reported resort bookings for the Memorial Day holiday weekend were stronger than last year, and Atlanta indicated cruise-line bookings were up slightly. Atlanta also reported, however, that the Gulf oil spill and Tennessee floods had already resulted in some vacation lodging cancellations. The potential exists for a much greater impact, although contacts are quite uncertain as to the ultimate effects. 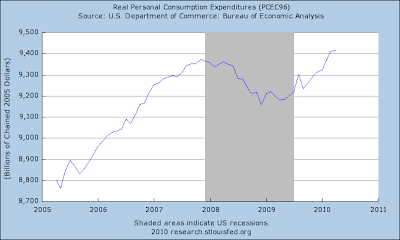 Real (inflation-adjusted) PCEs have been in an uptrend for about a year. Also note they are now slightly above levels seen before the financial collapse in 2008. 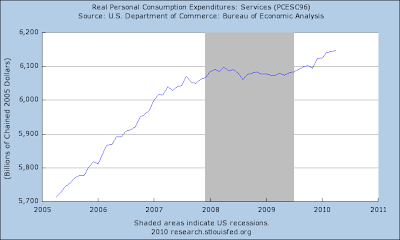 Services comprise the largest percentage of PCEs. They leveled off after the collapse and are now starting to increase. 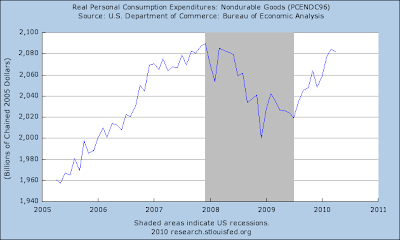 Spending on non-durable goods is also in a clear uptrend and is approaching levels last seen at the height of the previous expansion. 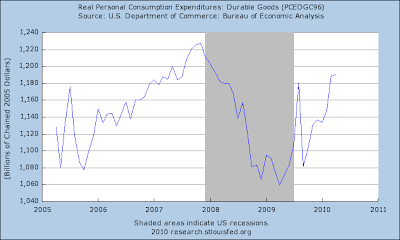 Durable goods spending is also in an uptrend.

Business spending increased moderately from the previous report. Cleveland, Chicago and Dallas noted that growth in manufacturers' inventories was leveling off, while Boston, Atlanta, and St. Louis reported the same for retailers' inventories. In contrast, several Districts reported that auto production was failing to keep up with demand, pressuring already lean auto dealer stocks. Capital spending was slightly higher in a number of Districts, although several indicated that continuing caution on the part of firms and tight credit availability were limiting expenditures. The manufacturing, transportation, and energy industries accounted for most of the increase in spending on plant and equipment. Boston reported that spending on information technology services increased.

Here are some charts of the relevant data: 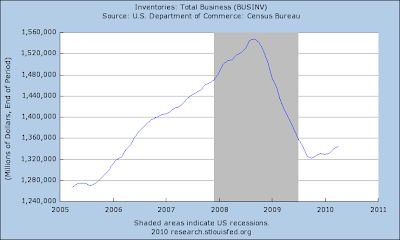 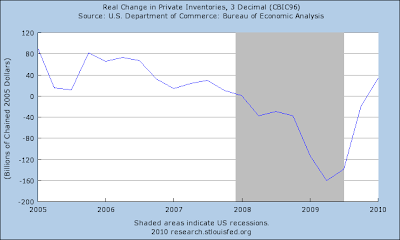 by the above chart of real change in private inventories.

Manufacturing and transportation activity continued to gradually improve across all twelve Districts. Most Districts reported further increases in factory production, shipments, and new orders, although Philadelphia and Chicago noted that the pace of gains had slowed in May. Steel producers and metals manufacturers reported moderately higher production in Cleveland, Chicago, St. Louis, and Dallas, although Chicago indicated capacity utilization leveled off in May. Auto and parts production increased in the Cleveland, Richmond, and Chicago Districts. Oil refinery capacity utilization was up in the Dallas District. Higher residential construction increased demand for construction equipment and materials in the Philadelphia, Richmond, Chicago, Dallas, and San Francisco Districts. Chicago also noted that demand from Asia and South America for heavy equipment continued to be robust. The output of medical equipment and pharmaceuticals remained strong in Boston and Chicago, as did high-tech manufacturing in Boston, St. Louis, Kansas City, and San Francisco. Food processing increased in Dallas and San Francisco. Trucking and rail activity increased, with freight traffic and raw material shipments on the rise in Cleveland, Atlanta, and Dallas. 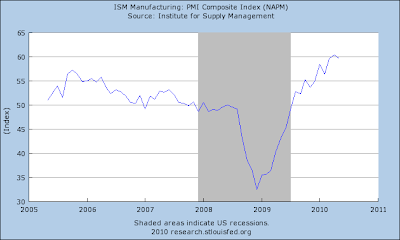 Manufacturing continues to do well, as does 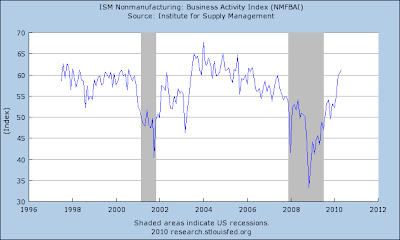 Residential real estate activity improved since the last report. Most Districts noted an increase in home sales and construction prior to the April 30th deadline for the homebuyer tax credit, with contacts in many of these Districts also indicating a corresponding slowing in activity in May. Tight credit, the elevated inventory of homes available for sale, and the "shadow inventory" of foreclosed properties on banks' balance sheets held back residential development in the New York, Cleveland, Atlanta, and Chicago Districts. Commercial real estate activity generally remained weak. Office, industrial, and retail vacancy rates continued to drift upward in many Districts putting downward pressure on rents. However, lower rents were said to have led to an increase in leasing activity in New York, Philadelphia, Richmond, Kansas City, Dallas, and San Francisco. The elevated inventory of existing properties for sale or rent continued to weigh on new private nonresidential construction. However, stronger industrial demand was noted in several Districts. Public construction increased in Philadelphia, Cleveland, and Chicago, but slowed in Minneapolis.

Labor market conditions improved slightly with permanent employment levels edging up in most Districts. In addition, many Districts again noted an increase in temporary hires, with Boston and Dallas also indicating a pick up in temporary-to-permanent transitions. By industry, manufacturing was the most often cited source of employment gains (both temporary and permanent), and Cleveland, Minneapolis, and Dallas noted an increase in the manufacturing workweek. Other sources of increased employment were the biopharmaceutical industry in Boston, retail trade in Chicago, and transportation in Dallas.

This is the big weakness of the current expansion -- the lack of job growth. Initial unemployment claims are still in the 450,000 area and have moved sideways for a majority of the year. The rate of establishment job growth was increasing until last month when census jobs were the only jobs created. It is important to remember that is only one month of data, but it's still a very negative development.
Posted by Unknown at 7:28:00 AM