The Case-Schiller house price index was reported this morning at -3.1% YoY for the month of January. This is the mildest decline in several years. This report, together with last Friday's inflation report, which showed a decline in core inflation due in part to "owner's equivalent rent," is cause for looking at an obscure but in my opinion crucial metric.

One of the most interesting alternate measures of the economy was first presented a couple of years ago by Tim Iacono of The Mess that Greenspan Made. The CS-CPI is the consumer price index, with the Case Schiller house price index substituted for owner's equivalent rent. When he introduced this measure, Tim noted that owner's equivalent rent had "utterly failed" to catch the inflationary implications of the housing bubble, and specifically that the Fed would have felt far more compelled to act than they actually did, believing inflation at the time to be quiescent.

By replacing owner's equivalent rent with the Case Schiller housing index, the CS - CPI captures the relative strengths of inflation vs. the deflationary impact of the bursting of the housing bubble on the economy. Thus, while Tim treated it as just a curiosity, I believe the CS - CPI uniquely captures an important dynamic. When it went negative in 2008, that meant that the contractionary impact of the housing bust was overwhelming the rest of the economy. On the other hand, I always suspected that the "real" bottom in the economy might be when the CS-CPI bottomed, meaning that the deflationary pressure on all things bought or sold by average Americans, including houses, was beginning to ease. 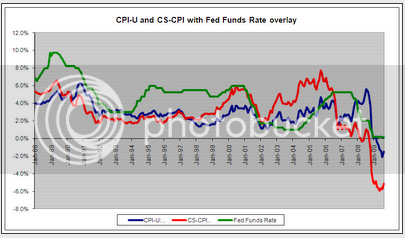 Last Friday's negative core CPI due in part to a negative Owner's Equivalent Rent made me curious about what the CS - CPI was showing now. And I was in for a surprise.

Of course, that doesn't mean it couldn't turn negative again, especially once the $8000 home buyers' credit expires. But for now at least, the CS - CPI is showing, for the first time in nearly two years, that the forces of contraction are not overwhelming the rest of the economy.
Posted by New Deal democrat at 9:30:00 AM