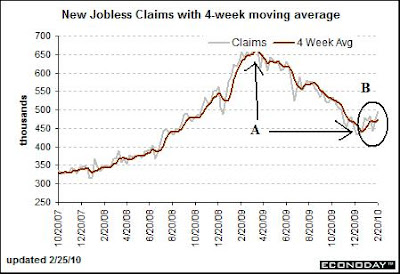 Since the beginning of the year we've seen two periods when there were distortions in the data. The first was about a month ago. The second was this report, which Bloomberg noted:

The number of jobless filing for initial unemployment claims increased in February, pointing to trouble for the February employment report and sending equities and commodities lower in immediate reaction. Initial claims jumped to 496,000 in the Feb. 20 week, the highest level since November. The four-week average, up 6,000 to 473,750, is also the highest since November and is more than 15,000 higher than January levels. In an ominous note for the monthly jobs report, claims offices said heavy weather increased the number of claims in the week. Continuing claims, where data lags by a week, were slightly higher at 4.617 million and are little changed from January levels. The unemployment rate for insured workers is unchanged at 3.5 percent.

Initial jobless claims unexpected jumped a sizeable 31,000 to 473,000 in the week ended February 13 week after dropping 41,000 the prior week. There are important special factors possibly affecting the data but the Labor Department offered no explanation. An obvious probable factor was extremely heavy weather through most of the nation in the reporting week, and results from four states had to be estimated including the key states of Texas and California with holiday backlog in the latter having skewed prior reports. Count on lots of speculation on how snow storms over the past two weeks affected the numbers.

I'm not sure how much credence I give to that statement regarding weather. For example, I live in Houston, Texas, where the winter has been really cold by Texas standards. We've even had snowfall in Northern Texas cities like Dallas. For a city that is not equipped to deal with this (no snow removal, inability to deal with driving on ice etc...) it can be a big problem. But I'm just not sure I buy the argument that the weather is the reason for the skewed data. I'm not saying it's impossible, but not possible.

I think there are some fundamental factors at work here which, if they continue for more than a few (say, through March), will have some negative implications for the recovery.
Posted by Unknown at 9:30:00 AM