No, Virginia, US Manufacturing Isn't Dead

First -- a big hat tip to co-blogger SilverOz for starting this line of thought. 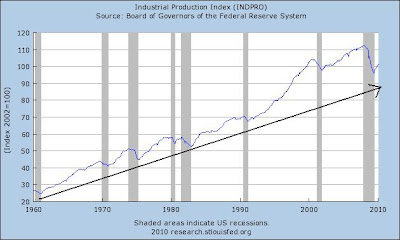 There is a common theme across the internet: US manufacturing is dead and it's never coming back. Well, there's a big problem with that analysis: it's not true. In fact, as the chart above indicates, it's actually false. Note that since 1960, the index of industrial production has risen from a little below 30 to its current level of about 100. And note the increase is continual -- meaning the number didn't just hover around 30 for most of that time only to spike up in one big move. The index has continually risen over that entire period.

Instead, what people are commenting on is the drop in manufacturing employment. Consider these two charts. 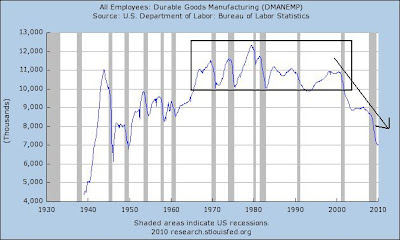 Durable Goods Employment remained fairly steady at 10 million to 11.5 million employees between the mid-1960s to the early 2000s. Then total employment dropped like a stone, losing three million people over the last 10 years. These are levels last seen in 1950. 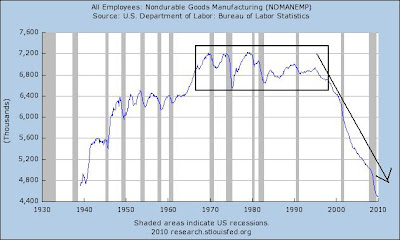 Non-durable goods manufacturing is even worse. From the mid-1960s to the early 200s, total employment in this area hovered around a 6.8 million. However, starting in 2000, the number fell off a cliff, losing almost 2 million people. This is the lowest the number has been in over 60 years.

However, over the last 15 years we've seen an increase in manufacturing productivity. Consider the following: 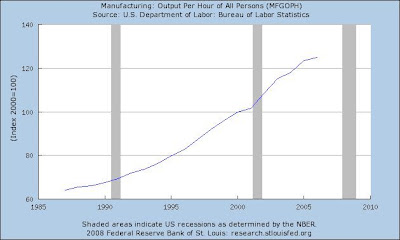 Manufacturing Output per hour has increased continually since records have been kept, as has 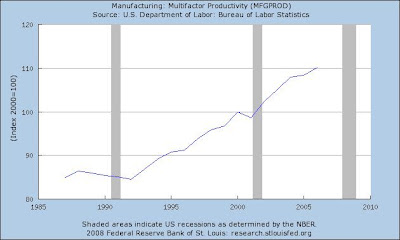 What does all this information tell us?

US Manufacturing is alive and well. The real issue is manufacturing employment, which is dropping like a stone. And the reason for the drop is an increase in productivity.

In addition, SilverOz adds the following: 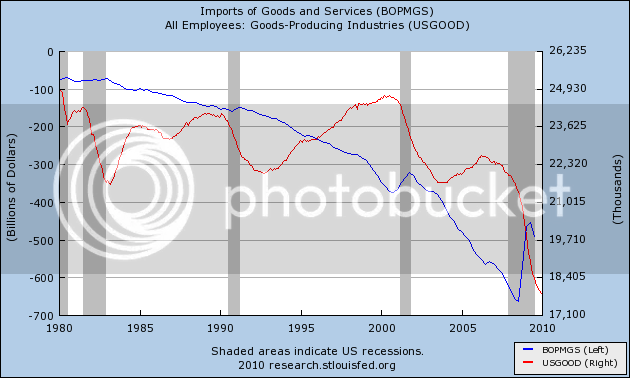 What we clearly see is that imports increased quite dramatically over the last 30 years, while good producing jobs remained fairly level (dipping during recession and then recovering) until this last recession, which took a huge toll on manufacturing employment even though imports actually declined. This again plays much better to the argument that productivity increases are the greatest contributor to our decline in manufacturing employment than the outsourcing/imports argument.
Posted by Unknown at 11:30:00 AM