Sunday's New York Times had two Page 1 above-the-fold stories that, in my opinion, cast serious doubts on what type of "recovery," for lack of a better word, we're in store for. First up is "Food Stamp Use Soars Across U.S., and Stigma Fades." The lede: "With food stamp use at record highs and climbing every month, a program once scorned as a failed welfare scheme now helps feed one in eight Americans and one in four children." As concerned as I've been for some time about what's going with our economy, these numbers startled even me. This story is a real eye-opener, and should be a wake-up call for us all.

The other noteworthy story appeared right beside the food stamp story: "U.S. To Pressure Mortgage Firms for Loan Relief." Lede: "The Obama administration on Monday plans to announce a campaign to pressure mortgage companies to reduce payments for many more troubled homeowners, as evidence mounts that a $75 billion taxpayer-financed effort aimed at stemming foreclosures is foundering." 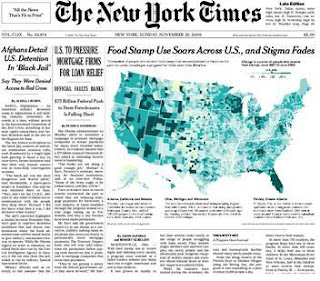 We continue to see an ever-increasing number of homeowners underwater on their mortgages, and there's concern that another wave of defaults and/or foreclosures is headed our way in 2010. So you'll excuse my muted reaction to the fact that initial claims for unemployment insurance dropped into the mid-400k range. The government has stepped in and to fill the spending void created by the tightening of purse-strings on the part of both businesses and consumers. But there are underlying, structural issues at play here (like our collective debt-to-income ratio) that the government simply cannot address.

But let's shift gears and look at the stuff that matters in actually making the recession call.

Employment is still a mess, although we know it's less of a mess and a lagging indicator. 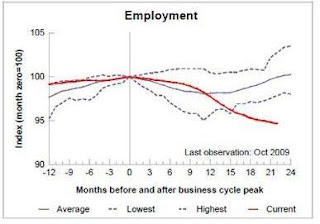 Industrial Production appears to have carved out at least (let's hope) a temporary bottom, and is one metric we can look at as a positive, notwithstanding that it's taken a whole lot of government largesse to get us there. 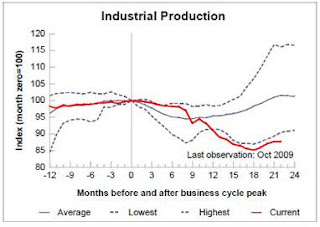 Real Income continues to go nowhere fast. With unemployment as high as it is and record slack in the labor market, it's hard to envision a scenario any time soon wherein workers will have any leverage to seek higher wages. Just too many people looking for work now to get any wage inflation. 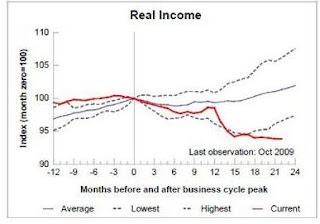 Retail Sales are flatlining for some time now, and early reports (as of Sunday night) for Black Friday seem to indicate heavier foot traffic, a very modest increase in spending, and a laser-like focus on the part of the consumer for discounted goods. 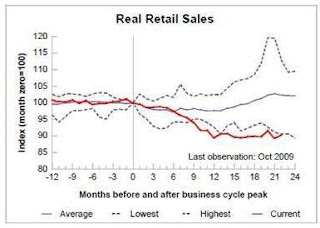 In a nutshell, we may technically be out of recession by virtue of what will likely be two consecutive quarters of GDP growth (although frankly I think the NBER is going to ponder this recession-end call long and hard before they make it), but it is clear that tens of millions of Americans don't much care what economists or the NBER are -- or aren't -- calling it, as they're still feeling significant distress.

I started this post on Sunday night, and intended to finish it up on Monday night with some final thoughts. Little did I know that Paul Krugman would finish it for me in his Monday column:

"There’s a pervasive sense in Washington that nothing more can or should be done [to promote job growth], that we should just wait for the economic recovery to trickle down to workers.

"This is wrong and unacceptable.

"Yes, the recession is probably over in a technical sense, but that doesn’t mean that full employment is just around the corner. Historically, financial crises have typically been followed not just by severe recessions but by anemic recoveries; it’s usually years before unemployment declines to anything like normal levels."

Mr. Crane is part of a growing group of underemployed -- people in part-time jobs who want full-time work or people in jobs that don't employ their skills. Since the recession began two years ago, the number of people involuntarily working part-time jobs has more than doubled to 9.3 million, according to the federal Bureau of Labor Statistics, the highest number on record.

The proliferation of underemployed could represent a profound reordering of the employment structure. Many people who had comfortable full-time jobs with benefits and advancement opportunities now are cobbling together smaller jobs often at lower pay, in a shift that economists say could become permanent for many individuals stuck in the cycle. Underemployment, along with unemployment, is widely seen as a force slowing the economic recovery.

The trend has been building for years, says Robert Reich, who served as labor secretary under President Bill Clinton and now is a professor of public policy at the University of California, Berkeley. "For decades, workers have been watching their salaries and benefits erode," says Mr. Reich, who took an 8% pay cut last week, along with the rest of the Berkeley faculty.

"We are subjecting millions of people to a standard of living below that which they could achieve if the economy were at full capacity," he says. "Underemployment means that many more people who can't spend as much as they otherwise would."

This is from today's research note from David Rosenberg: 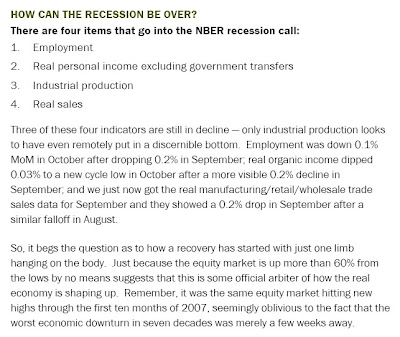 Adding, for the record: Rosie's piece wasn't published until hours after this post printed, lest anyone wonder who was ripping off whom.