Of course, none of the people telling us that "non-seasonally adjusted claims are the real claims" had a peep to say about the subject back in September when SA claims were running at 557,000, and NSA claims were at 466.267 (having fallen from 671,242 in early July). Were there any breathless headlines about 200,000 fewer "real" job losses? No, of course not. NSA claims only matter when they are higher (for seasonal reasons) than SA claims.

In the case of the blogger in July, his black swan quickly turned up dead in August as jobless claims resumed their fall. The Doomsayers now will just as surely be proven wrong come the end of January -- by which time they will ignore the data and simply move on to the next reason to predict Armageddon.

But given the sudden downdraft in SA claims to 466,000 last week, Prof. Brad DeLong not unreasonably asks if the seasonal adjustments are missing something. The long answer, I suppose, would have to be given by the BLS statisticians themselves (and they would probably respond to a query from Professor DeLong), but we can give a good approximate answer, because there are comparable past episodes that suggest a result.

In addition to this past July, the other episodes include the severe recessions of 1974 and 1982. Both of these deep recessions each featured two periods of large seasonal adjustments: once as they deepened and once again as they abated. Let's take a look at them.

First, here is a graph of both SA and NSA initial jobless claims during the 1974 recession: 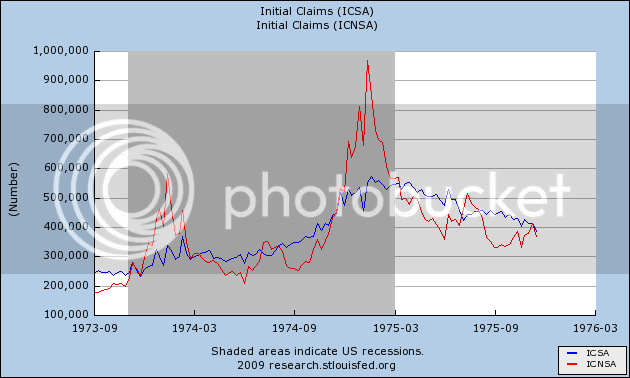 The 1973-74 holiday season NSA spike appears to have sometimes - but not always - exaggerated the underlying trend upward. Similarly, the July 4 1975 spike seems to have briefly exaggerated the underlying trend downward. In neither case, however, did the SA reverse or hide the trend. It is almost impossible to read what if anything the 1974-75 holiday season NSA spike may have done, as it occurred right at the height of SA claims. If anything, in that case it may have slightly muted the trend - but again, the trend is unmistakable.

Next, here is a graph of both SA and NSA initial jobless claims during the 1982 recession: 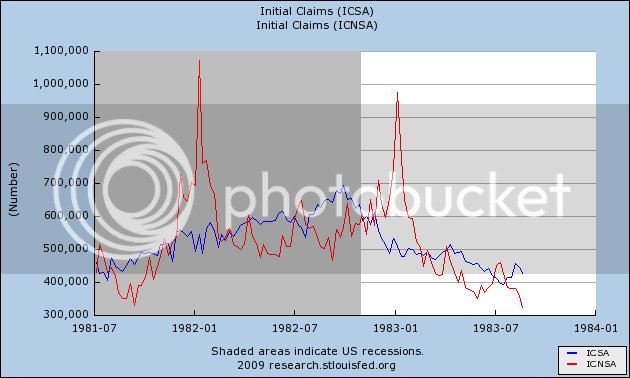 Similarly, the July 4 spike this past summer briefly amplified the downward trend in jobless claims - but my no means hid the trend. 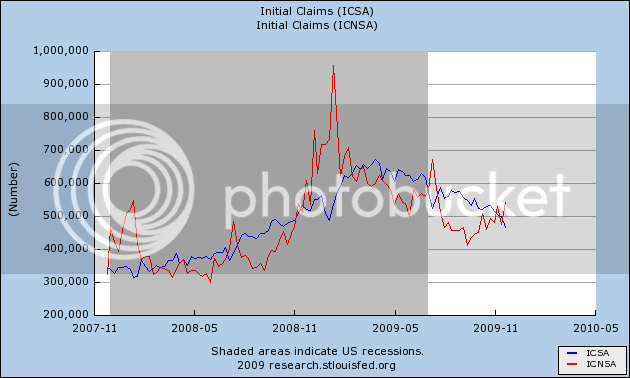 It seems likely that last week's sudden SA decline in initial jobless claims similarly amplified the underlying downward trend -- but by no means hides any alleged "real" countertrend higher. Just as in August initial jobless claims never again were recorded at the 600,000+ level they had been in June, it seems likely that by the end of January, there will be a slight rebound in initial claims - but never again hitting the 500,000+ recorded in October.
In short: the official adjustments may sometimes overcompensate for seasonal spikes during periods of big recessions, but if anything exaggerate rather than hide the underlying trend.
__________

[t]he worry is that not as many people are being laid off because there aren't as many people at work in construction and Christmas rush goods-producing jobs to be laid off, and that we should be at the very least cautious in interpreting one-week movements in unemployment insurance claims. Perhaps we want to argue that the labor market is improving in a sense, but we should be clear on what sense that improvement is. It is: in a normal year new weekly unemployment insurance claims rise by about 100,000 in the month before Thanksgiving; this year they have risen by only about 50,000. So things are getting better.

In the ultmate sense of jobs in the economy, I wonder if the Professor's worry isn't something of a wash. Yes, it's true that temporarily employed workers would have had paychecks for 8 or 12 or 16 weeks. But on the other hand, the failure to hire, let's say, 100,000 seasonal workers in July-September means that there were 100,000 less jobs recorded in the jobs survey those months, and 100,000 layoffs that will not correspondingly be counted in the November jobs survey. So in the payroll employment sense, the effect washes out.
Posted by New Deal democrat at 12:30:00 PM