Yesterday the Fed released the Beige Book. This gives us a good opportunity to take a longer look at the economy to see exactly what is going on.

Reports from the twelve Federal Reserve Districts indicate that economic conditions have generally improved modestly since the last report. Eight Districts indicated some pickup in activity or improvement in conditions, while the remaining four--Philadelphia, Cleveland, Richmond, and Atlanta--reported that conditions were little changed and/or mixed.

Consumer spending was reported to have picked up moderately since the last report, for both general merchandise and vehicles; a number of Districts noted relatively robust sales of used autos. Most Districts indicated that non-auto retailers were holding lean inventories going into the holiday season. Tourism activity varied across Districts. Manufacturing conditions were said to be, on balance, steady to moderately improving across most of the country, while conditions in the nonfinancial service sector generally strengthened somewhat, though with some variation across Districts and across industries. Residential real estate conditions were somewhat improved from very low levels, on balance, led by the lower end of the market. Most Districts reported some pickup in home sales, though prices were generally said to be flat or declining modestly; residential construction was characterized as weak, but some Districts did note some pickup in activity. Commercial real estate markets and construction activity were depicted as very weak and, in many cases, deteriorating.

Financial institutions generally reported steady to weaker loan demand, continued tight credit standards, and steady or deteriorating loan quality. In the agricultural sector, the fall harvest was delayed in the eastern half of the nation due to excessively wet conditions during October and early November. Most energy-producing Districts noted a slight uptick in activity in the sector since the last report. Labor market conditions remained weak since the last report, though there were signs of stabilization and scattered signs of improvement. While some Districts reported upward pressure on commodity prices, they saw little or no indication of upward wage pressures or of any significant increase in prices of finished goods.

Short version: things are moving in the right direction. The vast majority of districts sees improvement (8 of 11 districts saw things get better), but we have a long way to go. Let's break the data down into some smaller pieces.

Let's break the data down into smaller pieces:

Consumer spending strengthened since the last report, with sales of both general merchandise and autos improving across much of the country. Non-auto sales were reported to have picked up in the New York, Philadelphia, Cleveland, Richmond, Atlanta, Kansas City, and San Francisco Districts; sales were described as steady or mixed in the Boston, Chicago, Minneapolis, and Dallas Districts. St. Louis described retail sales as below expectations and down from a year earlier. Auto sales generally improved since the last report, in some cases rebounding from a brief dip after the "cash-for-clunkers" program ended. Increased vehicle sales were reported from New York, Philadelphia, Richmond, Chicago, St. Louis, and Dallas, while sales were described as flat or mixed in the Cleveland, Minneapolis, Kansas City, and San Francisco Districts. A number of Districts reported that used vehicles have been selling better than new ones.

Notice the year over year number has been increasing all year. This is to be expected as the number is coming off of an incredibly low bottom. However, also note the gray lines on the chart. These represent month to month increases and decreases. We've had nine monthly reports this year. Three have shown a decrease. That's not bad for an economy that was in a recession for most of the year. While I would like to see the month to month numbers increase, that's not going to happen in the near future.

Most Districts reported mixed to moderately improving manufacturing conditions since the last report. New York, Philadelphia, Cleveland, Minneapolis, Kansas City, and San Francisco all noted modest increases in manufacturing activity within their Districts. Manufacturing conditions in the Boston and Dallas Districts were characterized as mixed, with some improvement noted for biopharmaceuticals companies in Boston and high-tech manufacturing firms in Dallas. By contrast, Richmond and Chicago both reported that manufacturing activity had leveled off since the last report, while activity continued to decline in the Atlanta and St. Louis Districts, although at a somewhat slower pace than the last report. Tighter credit limited the ability of customers to place new orders in the Richmond District, while in the Chicago District, contacts noted a slowdown in the restocking of inventories. Increases in activity related to the transportation industry were cited in the Chicago, St. Louis, Cleveland, and Kansas City Districts, although such activity was mixed in the Dallas District and reported as declining in the San Francisco District. Several Districts noted an uptick in food-related production.

The ISM manufacturing index has rebounded from incredibly low levels to print numbers in the expansion area (plus 50) over the last four months. Looking back before recession, these numbers are in line with what we were seeing pre-recession. Also note these numbers are consistent the the continual improvement we've witnessed in the various regional Federal Reserve surveys (the Empire State index etc...). Bottom line: manufacturing has rebounded.

Activity in the service sector generally picked up since the last report, though results were mixed across Districts and across service industries. New York and Philadelphia reported that service-sector activity overall remained steady to up slightly, while St. Louis noted expanding activity. The information technology industry was reported to be showing improvement in the Boston, Minneapolis, and Kansas City Districts. A pickup in activity at staffing firms was reported by Boston and Dallas, whereas New York noted that activity remained sluggish. Strength in health services was noted in the Boston and Richmond Districts. Shipping activity was characterized as flat in the Cleveland, Atlanta, and Kansas City District, while Dallas reports some gain; however, Dallas and Atlanta both noted particular weakness in rail shipping activity. Professional and business support firms reportedly registered some improvement in the St. Louis and Minneapolis Districts but flat to declining activity in Richmond and San Francisco.

Home sales and construction activity improved across much of the nation, though prices were generally said to be flat or still declining somewhat. A majority of Districts reported that the lower-priced segment of the housing market has outperformed the high end. Increases in sales activity were reported in the Boston, Cleveland, Richmond, Atlanta, Chicago, Minneapolis, Kansas City, Dallas, and San Francisco Districts, whereas sales were described as steady or mixed in the New York and Philadelphia Districts. Multifamily housing markets deteriorated further in the New York and Chicago Districts. More broadly, a number of eastern Districts reported continued declines in home prices--specifically, Boston, New York, Philadelphia, and Richmond. In contrast, prices were said to have firmed somewhat in the Dallas and San Francisco Districts and stabilized in the Chicago and Kansas City Districts. Most reports maintained that the lower end of the market has outperformed the higher end: New York, Philadelphia, Richmond, Atlanta, Minneapolis, and Kansas City all noted relative weakness at the high end of the market, with relative strength at the lower end; in most cases, this strength was largely attributed to the homebuyer tax credit (which was recently reinstated and expanded to include existing owners).

New home sales have bottomed, although they are not as strong as existing home sales. 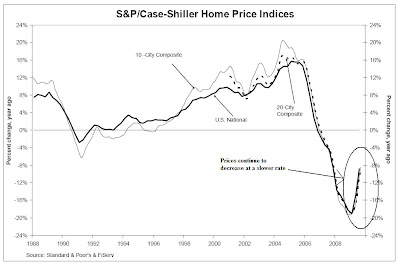 And while home prices are still declining, we're seeing clear improvement in the pace of the decline.

Short version: housing is getting better as well.

And then there is employment:

Labor market conditions remained weak since the last report, with further layoffs, sluggish hiring, and high levels of unemployment in most Districts. However, contacts in the Atlanta, Cleveland, and Richmond Districts reported that the pace of job cuts generally slowed in their regions, and most contacts in the Dallas District reported stable employment levels. Despite generally weak employment conditions, some signs of improvement were noted. For example, contacts in Boston reported that they were beginning to hire and reverse pay cuts or freezes that were implemented earlier in the year, and contacts in the St. Louis District reported that the service sector had started to expand recently. Expectations for the holiday season were mixed across Districts, with contacts in the New York and Dallas Districts reporting lighter-than-normal seasonal hiring and/or increases in the hours of existing employees, as opposed to hiring temporary workers, to meet the seasonal demand. On the other hand, most retailers in the Richmond District have hired the usual number of seasonal workers this year.

The good news is the front end of the labor market -- initial unemployment claims -- continues to decrease:

The 4-week moving average has been dropping since the Spring.

However, there is still no job creation. However, the rate of establishment job losses continues to decrease indicating we should start seeing job creation within the next 3-6 months.

Overall, the Beige Book indicates things are moving in the right direction.