In housing, the S&P composite index of home prices in 20 metropolitan areas was flat in October, falling short of expectations for a rise of 0.2 percent according to a Reuters survey. September's index was revised upward to a gain of 0.4 percent, from a previously reported 0.3 percent.

Only seven of the 20 cities in the composite index had month-over-month gains in prices in October, S&P said.

A sustained upturn in home prices is seen vital in the fledgling rebound in the hardest hit housing market since the Great Depression. There has been growing concern that record-high levels of foreclosures will mount even further and depress prices anew.

"The report signals that we have a growing stabilization in house prices. Obviously it's at a very slow pace and that is because the market is still saddled with a significant amount of inventory," said Anna Piretti, senior U.S. economist at BNP Paribas.

"We're likely to see some negative cross currents come into home prices in November, but that doesn't really change the trend -- the trend should be toward stabilization."

S&P said the annual rate of price declines improved, with the 20-city index dropping 7.3 percent from a downwardly revised 9.3 percent in September. A 7.2 percent downturn was forecast in the Reuters survey.

All 20 metropolitan areas and both the 20-city and 10-city indexes showed smaller rates of decline in October compared with September.

Let's take a look at the charts to place the numbers in perspective. As always, click for a larger image. 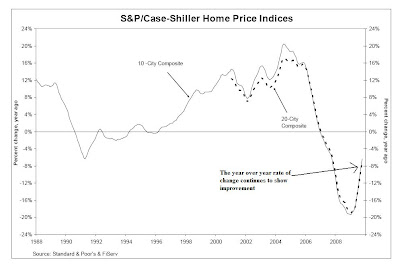 The year over year rate of deterioration continues to lessen. This is good news. However, 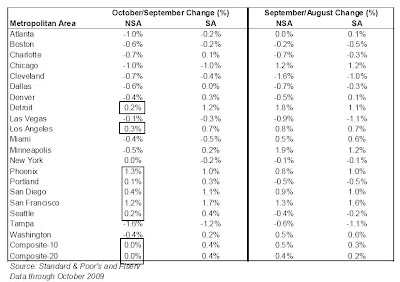 Last months month to month percentage change was at 0%. This was after 5 months of increases. In other words, it's important to remember that nothing moves in one direction at the same time. However, also note that only 7 cities saw month to month increases. Ideally, we'd like to see more. However, this is only one month of data meaning it could simply be an outlier right now. 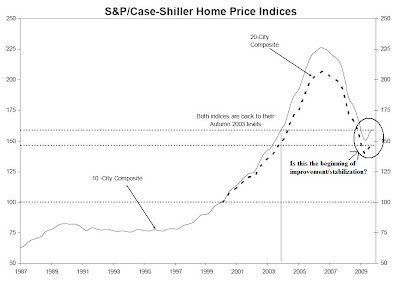 Above is a chart of the month to month increases. Notice we have 5 months of increases behind us right now.

Overall, this is a fair report. While the continued year over year improvement is a good development, the fact that the month to month gain was 0 and a minority of cities saw increases is not good. But, we will need a new more months of data before we can say one way or the other that this is a good or bad month.

Confidence among U.S. consumers rose in December for a second month as pessimism over the outlook for jobs diminished.

The Conference Board’s confidence index increased to 52.9, in line with the median forecast of economists surveyed by Bloomberg News, from 50.6 in November, the New York-based research group said today. Another report showed home prices climbed in October for a fifth consecutive month.

The report showed consumer attitudes about current conditions decreased to the lowest level in 26 years and expectations over wages also fell, a reminder that spending may be slow to recover with government assistance. A jobless rate that is forecast to exceed 10 percent through the first half of next year may prompt policy makers and retailers to maintain tax breaks and incentives to entice buyers.

Here is a chart of the number:

Note that confidence has been in a range for the last six months. In addition,

The overall reading is still low by historical standards. My guess is this number is all about the job market. Unemployment at 10% will do that.
Posted by Unknown at 2:30:00 PM