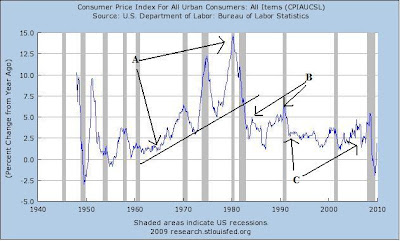 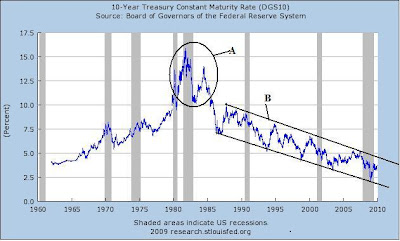 Consider the above charts together. Click if you need a larger image. The top is the year over year percentage change in inflation, while the lower is the yield on the 10-year Treasury.

Starting in about 1965 inflation started to increase. This reached its zenith in the late 1970s/early 1980s. Over the same period we saw interest rates increase. Why? Because investors began to demand they be compensated for exposing themselves to inflation risk. As inflation rises it eats into the steady income stream that comes off a fixed income investment.

Now look at sections B and C on the inflation rate chart. Over the last 20 years we've seen inflation come down. In the 1980s we saw inflation move between approximately 2.5% - 5%. In the 1990s we saw it fluctuate around 2.5%. Over the same period we saw the 10 -year Treasury yield decrease. Why? Because treasury investors saw their investments were not being eaten away by inflation. Therefore, they did not need high yields on their investments, thereby driving Treasury yields lower.

The above information tells us there is at least a strong correlation between inflation and Treasury yields. Again -- from an investment perspective this makes perfect sense.

Some people will read this and say "Shadow stats says the US is manipulating inflation rates." To that I would answer the following. If there was a great conspiracy over the last 30 years to manipulate inflation rates real life experience would trump the manipulation. For example, suppose the "official" inflation rate was 2%, but actual real-life inflation was 10%. Do you really think people would still be buying fixed income securities that bore a low interest rate? And would investors still be buying Treasury securities at such a rate as to send interest rates on a decreasing trajectory for over 20 years? In other words, Shadow Stats is crap. Please don't bring it up again.

But more to the point. As we move into a period of high government issuance of debt, it's important to remember that while supply is a determinant in interest rates (more debt = higher rates to attract investors) actual inflation along with inflation expectations are just as important. In fact, considering the rate of government debt increase we saw over the same period (1980 and onward), inflation expectations are just as important as overall supply.
Posted by Unknown at 11:30:00 AM