The Institute for Supply Management in the Chicago region reported its Purchasing Manager's Index at 60.0 this morning (above 50 means expansion). This is, quite simply, a blowout to the upside.

All categories of the Index improved: New Orders, Production, and Backlogs all increased, as most importantly for most of us, Employment. At 47.5, employment is still mildly contracting, but is listed at 50.2 seasonally adjusted (because layoffs are more typical at this time of year), meaning slight expansion -- the first time since before the Recession.

I am unable to copy and paste the representative comments mentioned in this month's survey, but they fall into two camps: (1) employers remain grinches with employee salaries and bonuses; and (2) employers are "hoarding jobs", still waiting to see if the increase in orders holds -- and ironically, this is holding back an even stronger recovery, as the backlog in vendor deliveries grows, preventing faster output.

Beyond that, according to Briefing.com, the Chicago PMI has a 91% record of anticipating the move in the ISM Manufacturing Index, which will next be released on Monday (of course, that wasn't true last month, which also featured an increase in the Chicago PMI).

Even more encouraging, the Chicago PMI never went above 60 during either of the two "jobless recoveries" of 1992 and 2002. The PMI was above 60 from late 2003 through 2005, and from late 1992 through 1995 and the tech boom. This rapid post-recession manufacturing expansion was last seen during the 1983 V-shaped recovery from the last very deep recession of 1981-82.

I suspect the revival in the automotive industry (Edmunds.com is expecting over 11 million SAAR vehicle sales in December) is the main driver behind this number. Bottom line: this is more evidence that manufacturing is indeed having a V-shaped recovery, and is consistent with an improving jobs picture.

This is a very good number. I would add to NDD's analysis that there is probably some inventory re-stocking going on. Consider these graphs from the St. Louis Fed: 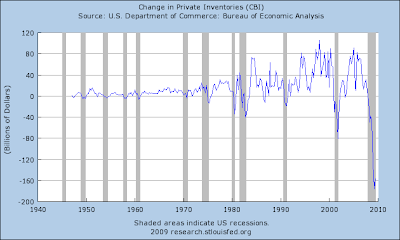 Above is a chart of the change in private inventories in billions of dollars. Notice the extreme depletion that occurred during the latest recession. That has to be made up. In addition, 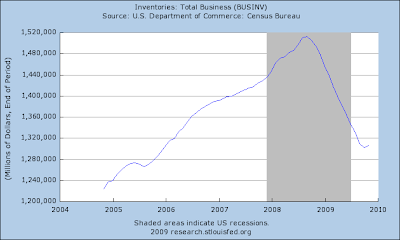 Total inventories have stopped dropping; they have found a bottom.
Posted by New Deal democrat at 9:05:00 AM