This was a terrific week for past news about the economy, as GDP was reported to have increased 3.5% in the Third Quarter, which ends (reasonable)talk of the "Great Recession" and focuses on the strength and sustainability of the Expansion.

Monthly reports for October were more mixed. New home sales unexpectedly declined, although within the range of "noise" in the uptrend since the bottom at the beginning of this year. Personal income was flat (a troubling sign) and spending declined. The University of Michigan consumer sentiment barometer increased in the second half of October, but is down for the month. On the other hand, durable goods orders advanced more than expected. The Chicago PMI also jumped to 54.2, which bodes well for Monday's ISM national manufacturing report for October. Production jumped to 63.9, New Orders to 61.4, and supplier deliveries to 50.7. Employment, unfortunately, lagged and was virtually unchanged at a depressing 38.3.

Likewise, Edmunds.com reported that October auto sales "look to be on track for Seasonally Adjusted Annualized Rate (SAAR) in the low 10 million range." That would still make October the third best month this year, and demonstates that cash-for-clunkers didn't decimate future demand. Here's the monthly chart since the February bottom:

Most of the high-frequency weekly data, however, was good.

Same store retail sales for the week ending October 25 were up again both YoY and WoW, a very good sign for continued consumer spending:

The Edmunds.com and same store retail sales numbers are also good news for the "real retail sales" number for October. I have previously described Real retail sales as the "holy grail" leading indicator for job growth.

In a similar vein, New Jobless Claims held steady at 530,000, while the 4 week moving average declined to 526,000. This is more than 20% lower than the peak number from 7 months ago, and if maintained another month or so, may mean that the bottom for jobs in the economy is at hand.

Railfax showed all rail traffic except for cyclical traffic increased for the last week, which is impressive since all sectors should have already begun their seasonal decline. Even cyclical traffic declined less than it did last year, so a year-over-year weekly improvement.

Meanwhile, truck traffic declined slightly from August to September, but September was still the second best month all year. As the graph below shows, the trend is clearly still up from earlier this year. 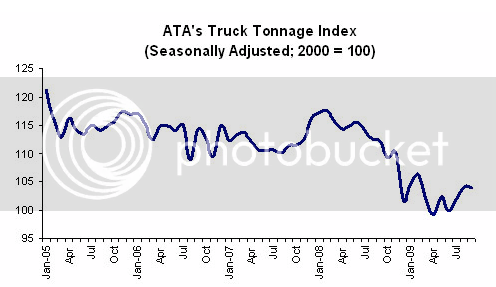 Some of the increase also appears to be seasonal.

Finally, the price of Oil meandered around the $80 mark, a threat to the incipient economic expansion.
Posted by New Deal democrat at 12:30:00 PM