From the Chicago Federal Reserve:

Here is a graph of the index:

This index isn't printing as strongly as other regional indexes, largely because the Chicago index didn't start to rise until mid-year. But it is currently moving in the right direction. It rose because three of the four components increased last month:

Then there is the Chicago Fed National Activity Index. Here is a chart of the three month moving average: 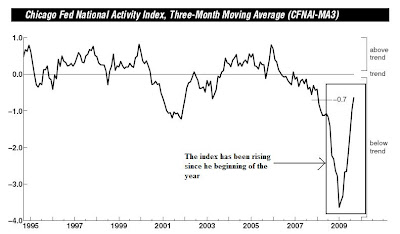 The best news from the chart is it is now at levels associated with national expansion:

Overall the Dallas chart is also moving in the right direction; it has been in a clear upward trajectory since the beginning of the year. So far, this data point looks like an outlier to the general trend.

Overall, these three reports are good good news. We have two reports that show a brightening picture and a third that is still in an upward sloping trend.
Posted by Unknown at 10:00:00 AM