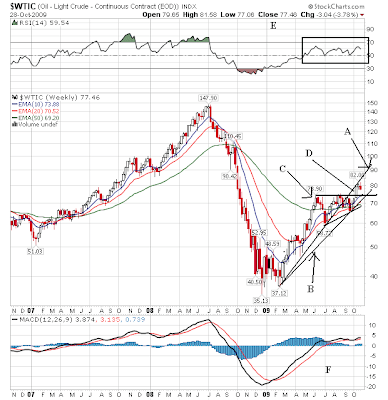 A and B.) Notice there are two upward sloping trend lines that emerge from the bottom earlier this year. The first one (A) has now become overhead resistance. The second one (B) is still in place.

D.) Prices broke out of this formation three weeks ago

E.) The RSI is not overbought right here. This is very interesting.

F.) The MACD is moving slightly higher. But also note it is coming off of an extremely overbought condition in mid-2008 and a very oversold condition at the end of 2009/beginning of 2009. 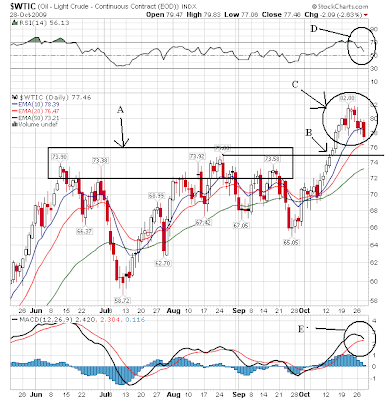 A.) Notice that the $73-$75 area was a huge supply area for about 4 months. That's a long time to hold resistance. Remember -- the longer a trend the more important its breaking.

B.) Prices broke through upside resistance earlier this month.

C.) Prices peaked and are now retreating a bit. Also note the bullish EMA picture -- shorter about longer and all rising. However, the 10 day EMA is about to move lower.

D.) The RSI is retreating and

E.) The MACD is about to give a sell signal.

Ideally, oil prices are supposed to rise in the spring for the summer driving season and then fall after Labor day. That didn't happen this time around -- prices spiked after labor day.