Will the Real Growth Please Stand-Up?

I've seen a fair amount of commentary around the web that the latest retail sales number is less than legitimate because cash for clunkers obviously played a role in influencing the number. In response to that claim consider the following chart: 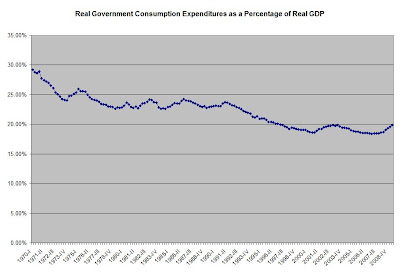 This is a chart of government consumption expenditures as a percentage of GDP. Both numbers are inflation-adjusted.

My position is straightforward: cash for clunkers is a classic Keynsean style program that did what it was supposed to do: stimulate demand. The growth that resulted from the program is real -- it increased production in the auto sector added wages to auto employees etc.... In addition, I've never bought into the "you're cannibalizing future sales" with programs like cash for clunkers. I've never seen a valid largely because I don't see how you can actually measure the answer.
Posted by Unknown at 11:01:00 AM