The market value of U.S. homes rose by a seasonally adjusted 0.3% in July compared with June, the third monthly increase this year, the Federal Housing Finance Agency reported Tuesday.

Prices for the latest month fell 4.2% compared with July 2008 and were down 10.5% from the peak in April 2007, the FHFA's statistics showed. Prices in July were at the same level as March 2005 and are essentially unchanged since January. Read the full report.

June's price increase was revised to a 0.1% gain, down from 0.5% previously reported.

Let's take a look at the data. 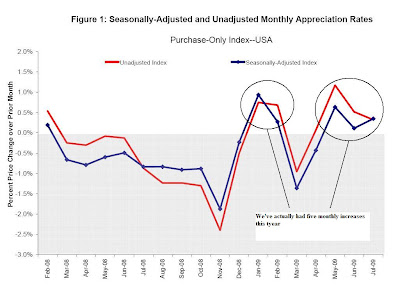 The above chart is of the month over month percentage change in housing prices. Notice that we've had 5 monthly increases this year (the Marketwatch story has 3). 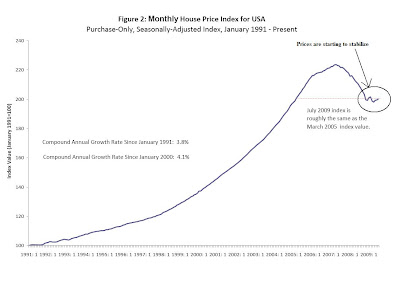 The longer term chart shows that prices have stabilized. Here is a chart of the numerical values in the above chart:

Prices have been fluctuating in the 199.1 to 201.6 range since last November.

Bottom line: the month over month numbers tell as that housing prices are starting to stabilize as well.
Posted by Unknown at 1:30:00 PM