First of all, I'm back. Mr$. Bonddad and I had a wonderful vacation. We took a cruise to Alaska we were supposed to take last year that was postponed because of Hurricane Ike. I've got a ton of pictures to go through (and I mean a ton) which I'll be posting over the next few weeks.

Also, I wanted to thank New Deal Democrat and Invictus for their very thoughtful and well-researched postings. It's great having such high quality co-bloggers.

So, let's get down to work and take a look at last week's SPY charts.

The main trend last week was a strong uptrend that started on Monday morning and continued until Friday morning. Along the way prices used various EMAs as technical support. Notice that on Wednesday afternoon and Thursday morning the MACD printed decreasing peaks while prices increased. This is the kind of divergence that traders look to as possible warnings signs of an upcoming market correction which eventually came on Friday.

The underlying reason for the rally was a string of good economic reports that further indicated the economy is coming out of or is formally out of the recession. I'll get to these throughout today. 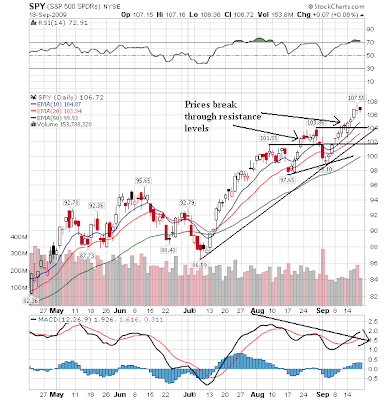 The daily chart is still printing a strong rally formation. Notice that prices are above all the EMAs, the shorter EMAs are above the longer EMAs and all the EMAs are rising. Last week prices moved through key resistance levels. However, the MACD has been in a divergence from prices since the beginning of August. Keeping the market from moving significantly lower has been a string of good economic reports. Instead, we've seen prices spend August consolidating in sideways action. However, the MACD gave us a buy signal last week.