Nonfarm payroll employment continued to decline in July (-247,000), and the unemployment rate was little changed at 9.4 percent, the U.S. Bureau of Labor Statistics reported today. The average monthly job loss for May through July (-331,000) was about half the average decline for November through April (-645,000). In July, job losses continued in many of the major industry sectors.

In looking at the report, first note the unemployment rate has been steady now for three months: 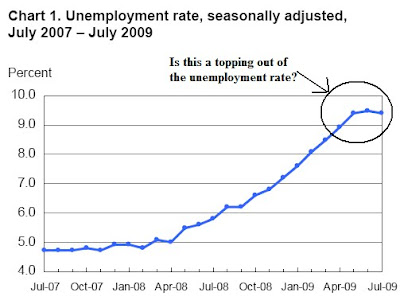 In an of itself, that is an encouraging; it indicates there is a possibility the unemployment rate is topping. Adding further evidence the that theory is the general trend of overall job losses: 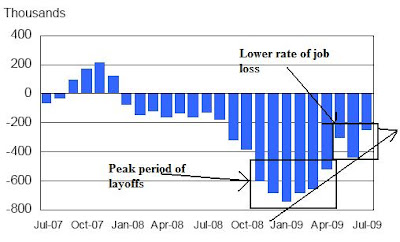 Note there are two areas. The first shows that maximum job losses occurred in the fourth quarter of last year and the first quarter of this year. However the trend since the beginning of this year is for a continuing decline in the number of job losses per month. As the chart above shows that trend has now been in place for six months, indicating we have a firm trend in place.

But there are other reasons indicating things are improving:

The number of persons working part time for economic reasons (sometimes
referred to as involuntary part-time workers) was little changed in July at 8.8 million. The number of such workers rose sharply in the fall and winter but has been little changed for 4 consecutive months.

This is good news as it indicates the level of people who are forced to work part time not because they want to but because they have to has been level for the last 4 months.

Note that the four week moving average of initial claims continues to move lower. Also note that according to the Department of Labor the unadjusted (non-seasonally adjusted) numbers fell by 48,000 last week. This is on top of a loss of 90,000 two weeks age and 60,00 next week. In short -- the unadjusted number of initial unemployment claims has dropped by over 200,000 in the last three weeks.