From Invictus: I'm Not Convinced

Let’s get straight to the most recently updated charts of four critical NBER recession-dating metrics:

First up, Employment, on which we’ll get a new read Friday. If today’s ADP print is any indication, we’re still looking at a nonfarm jobs loss of roughly 300,000. Here’s the chart through last month’s print (including data on previous recessions): 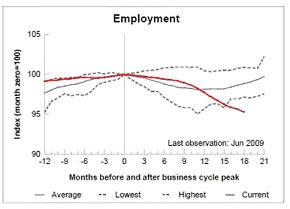 Industrial Production is still declining, and has certainly not troughed or signaled any uptrend whatsoever. 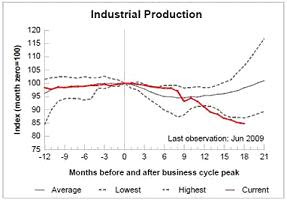 Real Retail Sales are flatlining, probably about the best that can be said for any of the metrics the NBER looks at: 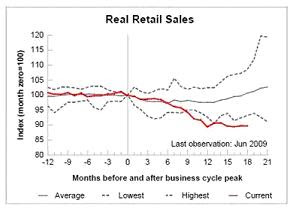 Real Income, which we just got, is not a pretty picture, as it continues 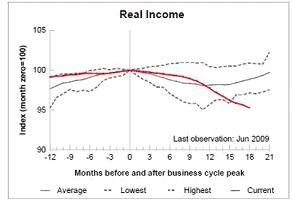 If we peel back the numbers a bit on Real Income, what we see is not encouraging. Private Wages & Salaries – the most important component of income – have declined by 6.1% year-over-year. Dividend income has been cut by one fifth, interest income by 4.5%. Proprietors’ income is down 8.0%. As we have seen previously, Personal Current Transfer Receipts (i.e. money from the government) has grown by 10.2% over the past year. Bottom line: No organic income growth. Is this the stuff of which sustainable recoveries are made? 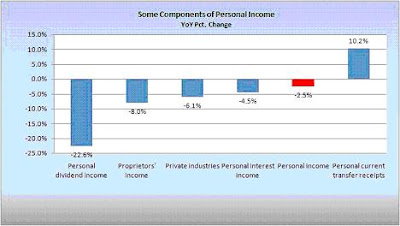 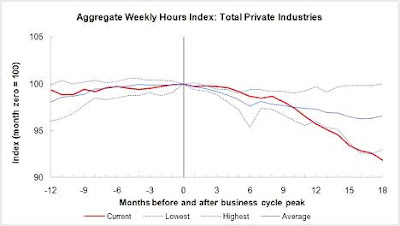 There can be little doubt that companies increase hours before they hire new employees. It’s just good business sense. There is HUGE slack in the labor market.

Some other things we know:

Q3 GDP will print positive, of that there’s little doubt. Could be 3% for all I know. Recall this, however (all data as recently revised by BEA): Q1 of 2008 printed -0.7%. President Bush signed his $150 billion dollar stimulus plan and Q2 printed +1.5%. When the adrenaline wore off, Q3 printed -2.7%, and we all know what happened after that. The point is that much of what is happening now – cash for clunkers, for example – is simply pulling forward future sales into this quarter and consequently weakening future quarters. Similarly, the $8,000 first-time home buyer credit has the same effect. How much can we pull forward, and what happens if/when these programs end (which they will eventually have to)?

We also know that the consumer – 70% of GDP – is still under significant strain and will likely remain so for quite some time to come (delinquencies, defaults, foreclosures, bankruptcies all still at troubling levels). We know that there are six applicants for every job opening. We know that unemployment is headed to double digits (lagging, yes, but problematic nonetheless). We know that there’s a huge overhang of housing inventory. Lastly, we know that Capacity Utilization is at an all-time low.

I still remain unconvinced that the recession has “officially” ended, and would certainly not draw that conclusion solely on positive Q3 GDP. There’s a reason the NBER analyzes a host of data, and through my lens most of it has not yet signaled a trough. In any event, it will certainly not feel like a recovery for most of America.

Note on recession tracking charts: The charts plot four main economic indicators tracked by the NBER dating committee [I added Aggregate Hours]; each series is indexed to 100 at the start of the recession. For industrial production, employment, and real retail sales, the average series includes the 10 recessions starting with the November 1948 business cycle peak. For real income, the average starts with the April 1960 peak. For additional information, see the Federal Reserve Bank of St. Louis Economic Synopses, 2009, No. 4.
Posted by Unknown at 9:30:00 AM