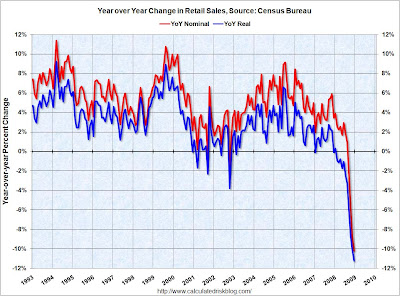 Thanks to Calculated Risk for the chart

Sales at U.S. retailers fell more than twice as much as forecast in December as job losses and the choking-off of credit led Americans to cut back on everything from eating out to car purchases.

The 2.7 percent decrease, the sixth consecutive drop, extended the longest string of declines in records going back to 1992, the Commerce Department said today in Washington. Purchases excluding automobiles slumped 3.1 percent.

Today’s figures indicate that the hit to spending in the recession is even deeper than estimated, and spurred a slide in stock-index futures. The loss of 2.6 million jobs and declining home and stock values are squeezing households, hurting retailers from Wal-Mart Stores Inc. to Tiffany & Co., which today said its holiday sales fell 21 percent and cut its earnings forecast.

Sales fell 0.1 percent for all of 2008 compared with the prior year, the first decrease in the Commerce Department’s records. Comparable data only go back to 1992 because government economists reformulated their retail-sales figures earlier this decade, and didn’t revise historical records beyond that year.

November’s decline was revised to 2.1 percent from a previously estimated fall of 1.8 percent.

Today’s report showed declines in 11 of the 13 major categories tracked by the government, led by a 16 percent plunge at gasoline service stations that partly reflected the slump in fuel costs. The drop at grocery stores was the biggest since April 2002 and the decrease at restaurants was the largest since the terrorist attacks in September 2001.

Note some of the data points: the loss is twice as much as estimated ... this is the first year over year loss since 1992 when the Census Bureau started keeping records ... November's decline was revised lower ... this is the longest streak of declines .... etc.. There is not once piece of good news in the release.

Let's take a closer look at the retail sector's charts. The charts below are from Prophet.net

Notice the following on the retail sector

-- The 50 day SMA has a slightly negative trend to it

Notice the following on the specialty retail chart

These are both incredibly bearish charts
Posted by Unknown at 9:16:00 AM