Highlights of the Recovery Plan

* $500 per worker, $1,000 per couple tax cut for two years, costing about $140 billion
* Greater access to the $1,000-per-child tax credit for the working poor
* Expansion of the earned-income tax credit to include families with three children
* A $2,500 college tuition tax credit
* Repeal of a requirement that a $7,500 first-time homebuyer tax credit be paid back over time

Let's review where we are.

According to the latest Beige Book things are pretty grim. This information is confirmed by the latest FOMC Minutes release. That means we are in a situation where we should do something. The proper question then becomes, what?

On one side, the Federal Reserve has been doing everything it can (and then some) to keep the financial sector afloat. The Fed has expanded its balance sheet enormously to deal with the financial crisis. Whether or not you agree with that expansion is a different question than whether or not it has been effective. The answer to the latter is yes -- credit spreads have come down. Lending won't return to pre-recession levels for awhile because, well, we're in a recession when lending naturally slows down anyway.

Then we have the consumer side of the equation which is in terrible shape. The US economy needs an active consumer, which is responsible for about 70% of out economic growth. But those expenditures have not been coming as fast lately. In fact -- the US consumer is pretty much going on strike right now: 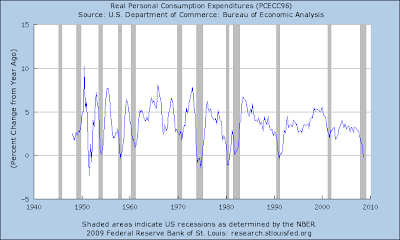 The big question is will it work? The basic GDP equation (consumer spending + investment + exports + government spending = GDP) says so. But it's important to remember that the best laid plans of mice and men can run afoul too. In other words -- this is not a guarantee and should not be sold as such. There are still a ton of risks involved with this move.
Posted by Unknown at 9:30:00 AM