We're Nowhere Near A Bottom In Housing

One-third of U.S. homeowners who sold their property in the 12 months through September lost money as foreclosures depressed prices and more Americans became unemployed in a weakening economy, Zillow.com reported.

Home values fell 9.7 percent in the third quarter, the seventh consecutive decline, to a median $202,966, Seattle-based Zillow, a seller of real estate data, said in a report today. One in seven homeowners had negative equity, or owed more on their mortgages than their houses were worth.

``It's clear we are at a unique point in history,'' Stan Humphries, Zillow's vice president of data and analytics, said in a statement. ``We've had seven consecutive quarters of decline, and we expect that to continue until at least the middle of next year. Most markets are still seeing five-year annualized returns, but we will see more markets slip into flat or negative long-term change as the economy continues to suffer.''

Remember the basic problems in the housing market: 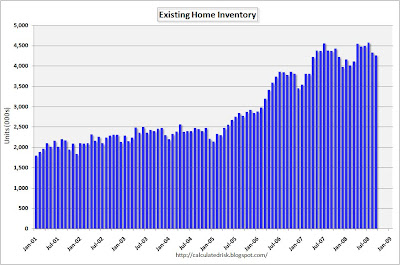 Supply is high from an absolute perspective, and 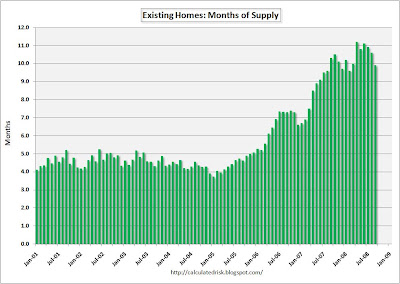 From a months of supply at the current sales pace perspective.

As a result, prices are dropping: 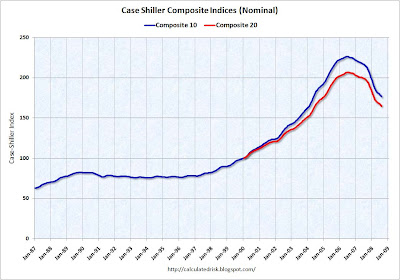 With employment losses accelerating and the stock market in turmoil I don't think this will change anytime soon.
Posted by Unknown at 1:30:00 PM