Intel Corp.'s deep cuts to its fourth-quarter guidance offers further evidence that technology companies are in for a beating because of the economy.

The Santa Clara-based company slashed more than $1 billion from its sales forecast and dialed its profit expectations way back. Intel, the world's biggest maker of PC microprocessors with 80 percent of the global market, blamed a clampdown on spending for reducing demand for its chips.

Cisco Systems Inc., the world's largest maker of computer networking gear, reported that orders fell off abruptly in October. The grim forecast suggested that other tech companies will have to absorb major damage to their sales as well. Cisco was the first major technology company to report results that included October.

Intel blamed "significantly weaker than expected demand in all geographies and market segments" and PC makers buying fewer new chips as they burn through existing inventory to save money.

Intel is a key company because it supplies a key component to a lot of different products. So when Intel is hurt everybody is hurt. In addition, technology was considered a safe haven for awhile because it wasn't exposed to the financial market issues. So much for that theory. 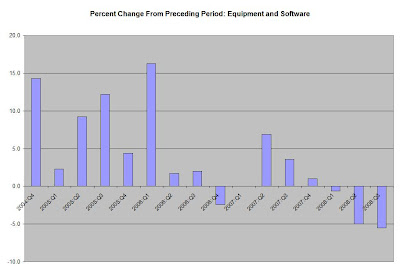 So -- what does this mean? Simple: the economy is in serious trouble.
Posted by Unknown at 9:45:00 AM