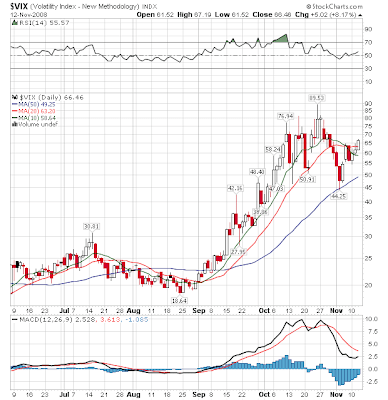 Wondering why the preceding chart is spiking?

The global hedge fund industry lost $100 billion of assets in October, according to an estimate from Eurekahedge Pte, as firms including Sparx Group Co. and Man Group Plc were hammered by investor redemptions.

Funds fell an average 3.3 percent, based on preliminary figures from the Singapore-based data provider, as measured by the Eurekahedge Hedge Fund Index, which tracks the performance of more than 2,000 funds that invest globally. That compares with a 19 percent slide in the MSCI World Index last month.

The biggest market losses since the Great Depression and investor withdrawals hurt the $1.7 trillion hedge funds industry that manages largely unregulated pools of capital. The index of global funds has lost 11 percent this year, set for the worst performance since 2000 when Eurekahedge began tracking the data.

``This wave of redemptions in the hedge fund industry is going to last for at least another six months,'' said Toyomi Kusano, president of Kusano Global Frontier, a hedge fund research firm in Tokyo. ``There are some funds that halted withdrawals, but those funds would eventually have to defreeze, and that means another wave of redemptions.''

Using the figures supplied in the story, hedge funds lost 5.88% of their total funds. That could lead to some problems. It also explains the wilder gyrations in the market over the last few months. Funds are dumping positions to raise cash to pay withdrawals.
Posted by Unknown at 11:30:00 AM