Former labor secretary Robert Reich lays out the underlying reason for an increase in government spending:

The real problem is on the demand side of the economy.

Consumers won't or can't borrow because they're at the end of their ropes. Their incomes are dropping (one of the most sobering statistics in Friday's jobs report was the continued erosion of real median earnings), they're deeply in debt, and they're afraid of losing their jobs.

Introductory economic courses explain that aggregate demand is made up of four things, expressed as C+I+G+exports. C is consumers. Consumers are cutting back on everything other than necessities. Because their spending accounts for 70 percent of the nation's economic activity and is the flywheel for the rest of the economy, the precipitous drop in consumer spending is causing the rest of the economy to shut down.

I is investment. Absent consumer spending, businesses are not going to invest.

Exports won't help much because the of the rest of the world is sliding into deep recession, too. (And as foreigners -- as well as Americans -- put their savings in dollars for safe keeping, the value of the dollar will likely continue to rise relative to other currencies. That, in turn, makes everything we might sell to the rest of the world more expensive.)

That leaves G, which, of course, is government. Government is the spender of last resort. Government spending lifted America out of the Great Depression. It may be the only instrument we have for lifting America out of the Mini Depression. Even Fed Chair Ben Bernanke is now calling for a sizable government stimulus. He knows that monetary policy won't work if there's inadequate demand.

For anyone who has either taken an economics course or looked at the BEA's GDP tables this should be nothing surprising. However, let's take a look at some graphs of how each of these particular parts of GDP have performed. 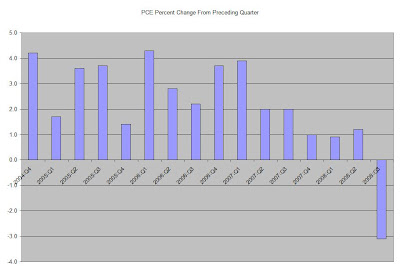 As Reich correctly points out, personal spending took a nose dive last quarter. Frankly, no one can blame consumers for not wanting to spend. The stock market was dropping off a cliff and the housing market had been in terrible shape for almost two years. Job losses were increasing as well. This is not the environment when people increase their spending. Considering PCEs account for 70% of US economic growth, this is a big problem. 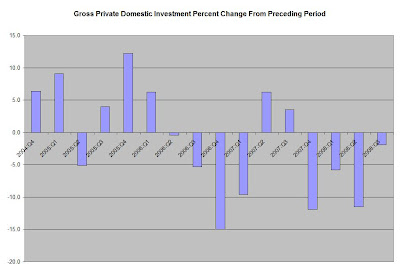 Gross investment has been sagging for awhile as a result of the housing contraction. This number shouldn't change for some time.

The US is running a trade deficit, making exports a moot case. In addition, the rest of the world is also slowing down making our exports less attractive. That leaves government spending: 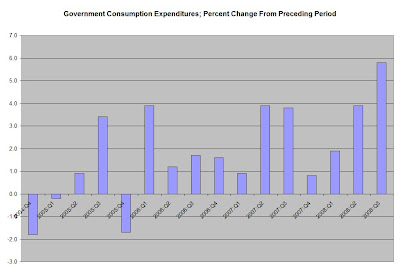 As the chart above shows, government spending has been increasing over the last three quarters. Given the bail-out numbers we're hearing I would expect this number to increase.

Continuing on this thought we have Paul Krugman from today's NY Times:

That said, F.D.R. did not, in fact, manage to engineer a full economic recovery during his first two terms. This failure is often cited as evidence against Keynesian economics, which says that increased public spending can get a stalled economy moving. But the definitive study of fiscal policy in the ’30s, by the M.I.T. economist E. Cary Brown, reached a very different conclusion: fiscal stimulus was unsuccessful “not because it does not work, but because it was not tried.”

This may seem hard to believe. The New Deal famously placed millions of Americans on the public payroll via the Works Progress Administration and the Civilian Conservation Corps. To this day we drive on W.P.A.-built roads and send our children to W.P.A.-built schools. Didn’t all these public works amount to a major fiscal stimulus?

Well, it wasn’t as major as you might think. The effects of federal public works spending were largely offset by other factors, notably a large tax increase, enacted by Herbert Hoover, whose full effects weren’t felt until his successor took office. Also, expansionary policy at the federal level was undercut by spending cuts and tax increases at the state and local level.

And F.D.R. wasn’t just reluctant to pursue an all-out fiscal expansion — he was eager to return to conservative budget principles. That eagerness almost destroyed his legacy. After winning a smashing election victory in 1936, the Roosevelt administration cut spending and raised taxes, precipitating an economic relapse that drove the unemployment rate back into double digits and led to a major defeat in the 1938 midterm elections.

What saved the economy, and the New Deal, was the enormous public works project known as World War II, which finally provided a fiscal stimulus adequate to the economy’s needs.

I'm not saying in any terms that we should start a World War to get out of the hole we're in. However, note that China has authorized a massive increase in spending over the next few years. Granted -- they have a huge surplus to work from while we have a deficit. However, it's food for thought that they are spending massively.
Posted by Unknown at 1:45:00 PM