Wow -- what a week. Last week several people asked if I still thought the market was bottoming. Frankly I still don't know. So, I'm going to use this blog today as a way of looking at that question. I'm going to start with what other people are saying, observing and thinking.

From this week's Barron's:

At Thursday's low, both the Dow and S&P had erased more than a decade's worth of gains. If the markets end the year where they finished Friday, both the 39% drop in the Dow and 45% slump in the S&P would mark their worst yearly decline since 1931. The current bear market, which has brought the DJIA down 43% from its October 2007 peak of 14,164, now rivals any decline in the 20th century, save for the loss of 83% from the peak in 1929 to the market depths in 1932 when the index bottomed at just 41.

A philosophical Warren Buffett told Fox Business News Friday morning that slumps worse than this one have happened before, referring to the 1929-1932 crash. Buffett noted that markets and the capitalist system overshoot and that this seems to be one those times. He said the markets are in a "negative feedback loop" as bad news becomes self-reinforcing.

It's tough to say when the markets will bottom, but unless the world is entering an economic depression, history suggests that stocks don't have much further to fall. Save for the 1929-1932 crash, no downturn in the 20th century exceeded 50%. One of the many ironies about this year's setback was that it was largely unanticipated because major averages began 2008 selling for a seemingly modest 16 to 17 times projected earnings, versus a peak of 25 in 2000. It turned out that profit estimates for this year were way too high.

Combine that thought with this fact from last week:

The week's trading was marked by a rare cross: The S&P 500 index dividend yield, about 3.79%, exceeded the 10-year Treasury yield, about 3.20%. For the first time in half a century, the dividend yield is higher than the bond yield. Many dividends will likely be cut next year, sending equity yields back down, and bond yields are at record lows. But the cross suggests stocks are cheaply valued. Bears say it just means there won't be any earnings growth for a while.

Pretty interesting. As the article (and another commenter suggested) there is no guarantee S&P companies will continue paying dividends. In fact, I would expect a wave of dividend cuts from the financial sector over the next 3-6 months. However, we haven't seen that yet which implies management is hanging on to anything that might bolster their stock price.

The blog dshort had this graph up last week (thanks to Calculated Risk for the link):

The current stock market decline is the worst since the Great Depression.

Chris Perruna had this chart up: 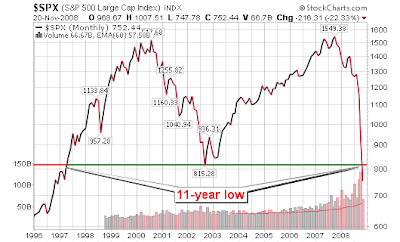 He titled the post "Support Violated" meaning we have lower to go.

And as usual, Corey over at Afraid to Trade had some great observations. Simply go to his blog and read the last few week's worth of posts.

Also chart out Tim Knight's Slope of Hope blog. I think he's one of the best chart people around.

And finally, read this post over at Barry's blog. Then check out what most of what he's written for the last few weeks as well.

So, that is a sampling of what other people are saying. I'll be back later today with my thoughts.
Posted by Unknown at 6:39:00 AM