We're Nowhere Near a Bottom in Housing

Sales of previously owned U.S. homes fell in October, with the median home price notching its biggest drop on record as tough economic conditions kept buyers on the sidelines, data showed on Monday.

Home prices in 20 major U.S. cities dropped 1.8% in September from the prior month, and had fallen a record 17.4% from the previous year, according to the Case-Shiller home price index published Tuesday by Standard & Poor's. Prices have fallen in all 20 cities compared with last month and a year ago.

However, the percentage drop in prices was the biggest since the NAR started keeping records in 1968. Distressed sales are accounting for about 45 percent of existing home sales.

Analysts said even though housing had become more affordable, sales were likely to remain depressed because of tight access to credit and mounting job losses.

While the drop in inventory is good news, notice that from an absolute numbers perspective the amount of homes available for sale is still sky-high (h/t Calculated Risk): 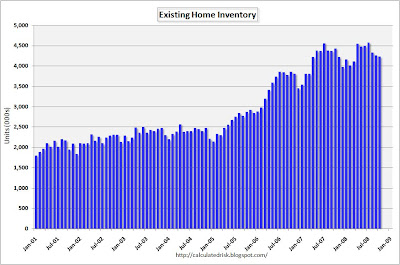 And as the article points out, job losses are really hurting sales figures. The most recent jobs report from the BLS indicates job losses are accelerating. As a result, personal durable goods purchases are decreasing (from the latest GDP report):

And then there are the credit markets which are clearly hurting the real estate market. The Federal Reserve's most recent survey of lenders noted:

Simply put, demand is down from a weakening job market and tighter lending standards. Supply is still high because of the increasing foreclosure situation. Decreased demand + high supply = lower price. It's that simple.
Posted by Unknown at 9:30:00 AM