The economy took a tumble in the summer that was worse than first thought as American consumers throttled back their spending by the most in 28 years, further proof the country is almost certainly in the throes of a painful recession.

American consumers -- the lifeblood of the economy -- slashed spending in the third quarter at a 3.7 percent pace. That was deeper than the 3.1 percent cut initially reported and marked the biggest reduction since the second quarter of 1980, when the country was in the grip of recession.

Consumers are hunkering down amid job losses, tanking investment portfolios and sinking home values, which are making them nervous about spending. 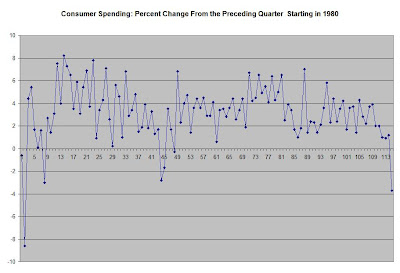 I didn't put the dates on the graph because it was too much information. But you will notice there are very few dips. The negative numbers occurred in:

These also correspond to recessions.
Posted by Unknown at 1:30:00 PM