Coronavirus dashboard for September 19: no, the pandemic is *not* over

﻿Contrary to the statement by President Biden last night, the coronavirus pandemic is *not* over.

Levels of COVID in wastewater continue to be as high as at any point before last winter’s original Omicron onslaught. And confirmed cases are at levels that were moderate - but not terribly low - before Omicron as well.
Hospitalizations have decreased by slightly over 1/3rd, from 46,000 to 30,000, from their peak in June, but are not as low as they were in summer 2020, summer 2021, or this past spring: 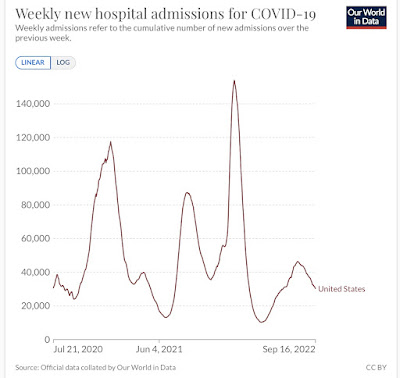 Where there is a definite abatement from earlier times during the pandemic is in deaths: 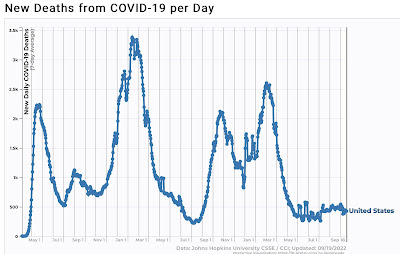 In the past 6 months, deaths have generally averaged between 300 and 500 a day, and are presently a little over 400 This is lower than at any previous point during the pandemic except for June and July 2021.
Deaths among the elderly continue to be about 3/4’s off all deaths from COVID: 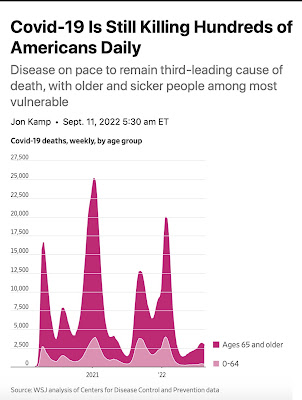 But the mortality rate for hospitalizations due to COVID has declined dramatically: 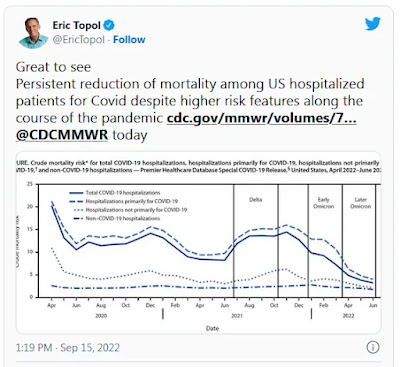 Weekly excess deaths have waned to an extreme minimum: 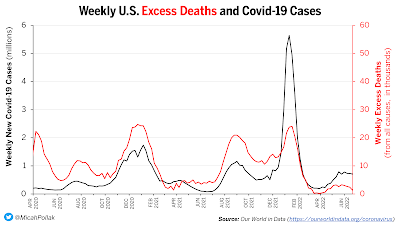 Together, these statistics suggests that a large share of people who die from COVID are the elderly who were already in poor health with compromised immune and other systems, who likely would have died from other causes in the immediate future.
Although I won’t bother with a graph, it is also true that the likelihood of dying from COVID skews heavily in the direction of those who are either not fully vaccinated, or are entirely unvaccinated.
Meanwhile, the CDC has updated its variant information. A  week ago there appeared to be an anomalous increase in the original BA.2 variant. When we last saw something like that, it turned out that it was really new variants BA.4&5. and for the first time in several months. This has been the case again, as several new variants are making headway: 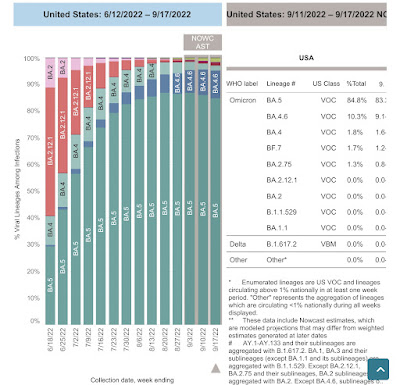 The two new variants that have appeared in the analysis are BA.2.75.2 and BF.7, also known at BA.5.2.1.7.
BA.2.75.2 is a subvariant of a strain that originally caused an outbreak in India several months ago. BF.7 is one of the many subvariants of BA.5 that have appeared globally. While I haven’t found a lot of analysis of the two in the past several weeks, I did find this:

The below article on the progress of BA.2.75.2 and BF.7 in other countries compared with BA.4.6 in particular states:

GISAID data shows that in many other countries where BA.4.6 has made significant inroads, it quickly faded in the face of another heavily-mutated new Omicron variant, dubbed BA.2.75. It was first sequenced in May in India, where it has spread rapidly.

In countries like Spain, Germany, the U.K., Ireland and Italy where BA.4.6 initially made way against near-uniform dominance by BA.5, BA.2.75 has beat back both of those predecessors and become dominant.

The article quotes biology Professor Tom Wenseleers of the Catholic University of Leuven, Belgium (author of the above tweet), who stated:

In short, the pandemic is by no means over. At the current rate of 400 deaths daily, there will be nearly 150,000 deaths annually from COVID. And at the rate of 300,000 new infections per week, about 1/3rd of all Americans will be infected during the year.
If you go maskless indoors, you are likely to catch COVID sometime soon. Depending on your age, the state of your immune system, and vaccination, your outcome will be better or worse. Yes, the pandemic is gradually transitioning to an endemic disease. But by no means are we there yet.
Posted by New Deal democrat at 12:55:00 PM