Our first November data is out this morning with the forward-looking ISM manufacturing report for October, as well as construction spending for October.

Let’s take the ISM report first, since it is an important short leading indicator for the production sector, and in particular its new orders subindex. In November the index rose slightly from 60.8 to 61.1, as did the more leading new orders subindex, which rose from 59.8 to 61.5 (note the breakeven point between expansion and contraction is 50): 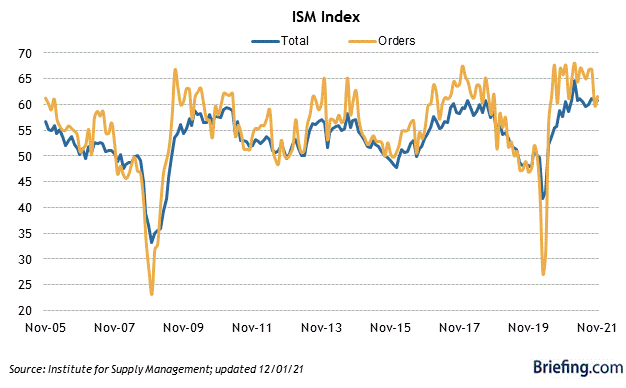 Both the total index and the new orders subindex have been running extremely hot almost all year, and there is simply no sign of a significant softening yet. This forecasts a strong production side of the economy through mid year 2022.
Turning to construction, during October in nominal terms overall spending including all types of construction rose 0.2%, from an upwardly revised -0.1% for September, while spending on the leading residential sector declined  -0.5%,  and is off -0.8% from its June peak:

Confirms the slowdown, but no recession level decline, shown by the latter.
Posted by New Deal democrat at 11:10:00 AM