The actual US coronavirus trajectory: “flattening the curve” at least until 2021


You probably remember the diagram from a month or so ago about “flattening the curve” of coronavirus infections. This was the concept that, once efforts to contain the pandemic had failed, the least worst option was to slow the spread of the infection so that medical facilities and supplies were not overwhelmed, because if infections exceeded medical capacity, many unnecessary deaths would occur.

“Flattening the curve” was not such an appetizing option either, because it meant that *everybody* got infected with the disease during the period of flattening, and so the death toll would still be horrifying, perhaps 1% to 3%. It also meant that the period that the infection would curtail society was extended to several years.

Shortly a much better alternative, based on the success of South Korea, was embraced. Described as “crush the curve,” it meant imposing firm lockdowns for a long enough period of time for thoroughgoing testing of the population, tracing contracts of those infected, and isolating the infected to be ramped up and in place.

Here’s what the three alternatives look like in a diagram: 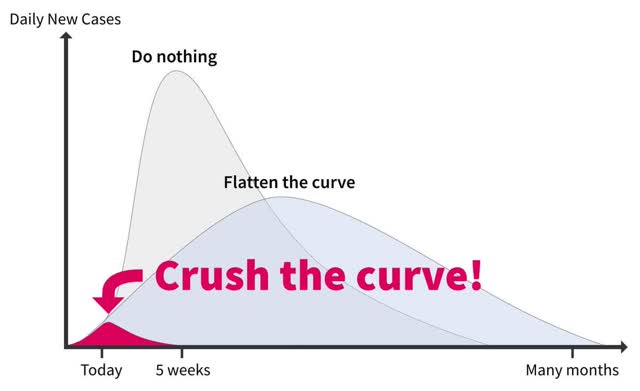 Throughout the latter part of March and into early April, one by one all but a few, mainly rural, States imposed lockdowns, and the rate of new infections quickly plateaued. But, due to the intransigence of Donald Trump personally and key members of his Administration, the ability to test in the number required was never implemented. In particular, Trump resisted for weeks making use of the Defense Procurement Act for obtaining the necessary medical equipment quickly.  He has never given the slightest indication that he views doing widespread testing as either necessary nor (politically) desirable.
Now Trump appears to have reverted to his original approach from January and February: do as little as possible so that he can (in his mind) credibly deny responsibility, and forecast that the pandemic is receding or ending. He is railing almost daily against continued lockdowns, and his attorney general is threatening to sue States that do not comply with “reopening the economy.”
In short, any momentum towards “crushing the curve” has come to a halt, and there have even been reversals.
Plainly Trump’s number one priority is not public health, but rather to have the worst of the pandemic - whatever that might be - over by autumn, so that he can run for re-election as a leader who successfully navigated the issue. He is being supported in this position by a few Trumpist governors and a number of plutocrats who are astroturfing protests against governors who have implemented lockdowns.But however much Trump might want to let the pandemic “wash over” society quickly, that approach is decisively not supported by a large majority of the public. This is why recalcitrant States in the old Confederacy ultimately gave in to pressure to implement lockdowns in the first place. What is going to happen in the States that “reopen” is that the disease will resurge towards exponential spread again, and that is going to lead to even more intense backlash and public pressure on the Trumpist governors to reimpose lockdowns. Meanwhile the Trump Administration’s absolute refusal to implement (and even to undermine) the regimen necessary to “crush the curve” means that option won’t happen either.So what I see as likely to be the path of the pandemic in the US over the remainder of the year is one in which there are periodic flare-ups towards uncontrolled spread, followed by similar periods of being locked down but without the necessary conviction in the Administration to “crush the curve.”And that means that, when all is said an done, the US is on a path of a year+ long period that most resembles “flattening the curve.” Most of the population will continue “social distancing” and even self-quarantine if possible, while those who see their risk as very small (the young) and those who are reckless will mainly resume close to normal activities. The disease will continue to slowly spread, and daily deaths will continue on a course for 1%+ mortality over several years. Except in local spots, the medical system will not be overwhelmed. But nor will meaningful progress be made towards containing the virus.Finally, because the virus will be continuing to spread at roughly the rate it is now, and continuing to kill people at roughly the rate it is now, a very large percentage of people will refuse to engage in activities that require large social exposure. And that means that large portions - maybe even a majority -of the economy will continue on a path of contraction or stagnation, leaving an ever spreading wave of bankruptcies and closures in its path.Since I do not see Trump ever changing, this path looks inevitable to me through the end of the year. Until at least next January 20, when the political situation might change dramatically, the US is going to follow a waxing and waning path of “flattening the curve.”
Posted by New Deal democrat at 11:30:00 AM