A month ago, when the 2- through 5-year bond yield curve first inverted, I wrote that while it might be a case of "the camel's nose is in the tent," i.e., the rest of the camel (yield curve) was likely to follow, there were a bunch of caveats:

In short, a one-day inversion over a limited portion of the bond yield curve, while more often than not heralding a full-on inversion and bad consequences to come, is by no means dispositive.

Generally speaking, for a yield curve inversion to give a true signal, it should last longer than a few days, spread out further along the yield curve, especially towards shorter yields (e.g. 6 month or 1 year yields), and deepen.

As of this morning, here's what bond yields look like: 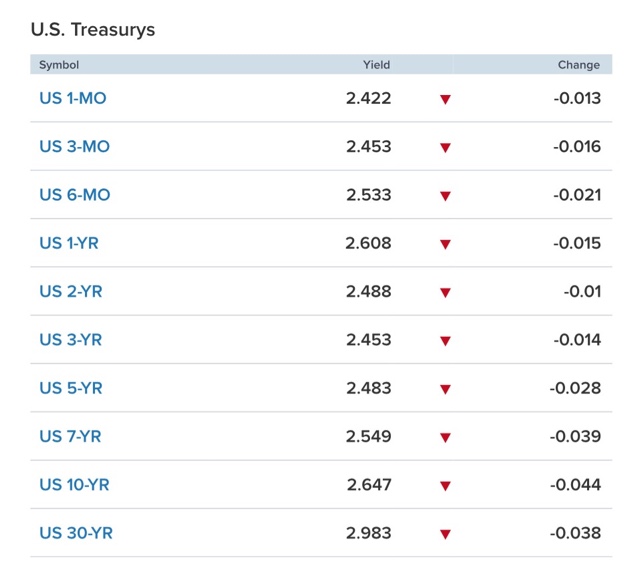 Note that the inverted spread between the 1 year and 3 year bond yields has deepened to -0.155%.

A recession in the next 12 to 24 months is still not a sure thing. There were deeper and more persistent inversions in 1966 and 1998 without a recession following in that time frame -- although 1966 was a very deep slowdown that just missed being a recession.

But there is simply a very strong possibility that we are looking, at very least, at a big slowdown soon.
Posted by New Deal democrat at 7:36:00 AM