I need to publish my first half forecast for 2019, but before I do, I want to see how a few leading indicators for December pan out. These include motor vehicle sales, the manufacturing workweek, new unemployment claims less than 5 weeks old -- and this morning's ISM manufacturing report.

To breifly recap, my long leading indicators turned neutral 7 months ago and haven't improved since, even going negative for a few weeks. As a byproduct of that, I have been waitiing on short leading indicators to decelerate as well, which they have shown strong signs of doing recently.

As part of that, two months ago I wrote that "I expect slowing [in the ISM new orders index] to continue."

Today the ISM reported for December that:

Manufacturing expanded in December, as the PMI® registered 54.1 percent, a decrease of 5.2 percentage points from the November reading of 59.3 percent. “This indicates growth in manufacturing for the 28th consecutive month. The PMI®recorded a substantial softening in December and retreated to a level not seen since November 2016, when it registered 53.4 percent,” says Fiore. A reading above 50 percent indicates that the manufacturing economy is generally expanding; below 50 percent indicates that it is generally contracting.

I have been using an average of the five regional Fed new orders indexes to forecast the direction of the ISM indicator.  Here's a comparison of the regional Fed averages (left) and ISM new orders (right) for all of 2018:

October's 57.4 ISM reading, while very positive, was nevertheless the lowest since November 2016. Today's reading is not just below that, but is the lowest since August 2016. Here's the longer-term graph (not including this morning) from Briefing.com: 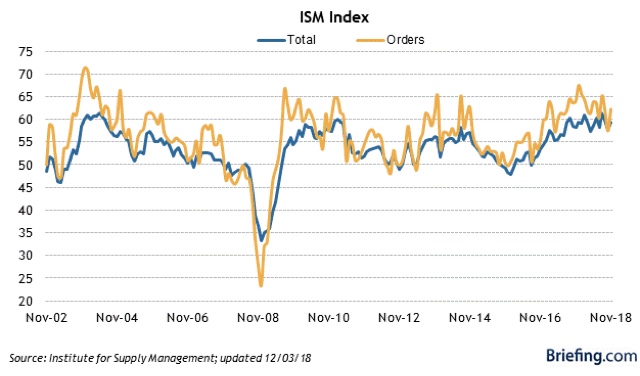 The sharp decelerating trend in the Fed new orders indexes since May's high is apparent. Now the ISM has confirmed the deceleration in spades. I suspect this reflects both the feeding through of the weakness in the long leading indicators, and also the nearly immediate impact of Trump's trade war policies. In other words, poor Administration economic policy may have taken a slowdown that was likely to happen in a few months, and moved it forward. The silver lining is that a slowdown, however sharp and however much "baked in the cake" at this point, is not a recession
Posted by New Deal democrat at 9:12:00 AM